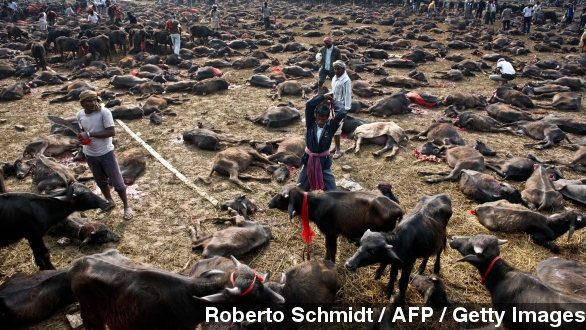 The Gadhimai festival is underway in Nepal, despite protests from animal rights groups.

This is the world’s largest animal slaughter festival — the Gadhimai festival — where Hindu worshippers slay tens of thousands of mostly buffalo and goats to honor their goddess of power.

It’s a tradition that happens every five years and goes back centuries. Devotees believe their sacrifices are rewarded with good luck.

Animal rights groups call it barbaric and cruel, and have long attempted to get it outlawed.

That’s in part because, as Press TV reports, the men doing the slaughtering can often be unskilled, which critics say results in needless suffering of the animals.

Rights groups have won one small victory: India’s Supreme Court asked the government to prevent illegal movement of animals across the border for sacrifice in Nepal.

Still, to critics of the practice, journalist Deepak Adhikari suggests there’s a lot of hypocrisy — especially coming from the West.

“For elite international activists, the problem seems to be that the animals are decapitated en masse in full public view. So, it's OK to decapitate them en masse inside a slaughterhouse?”

He goes on to suggest only vegetarians and vegans have a leg to stand on in this debate.

And to be fair, animal rights groups like PETA often do run “Go Vegan” campaigns.

But Adhikari also points out that animal sacrifice is part of the deep-rooted belief system of the festival’s participants. And in any case, the outcry isn’t likely to change much in Nepal, where officials have suggested they would not ban the festival or the practice of animal sacrifice.