Netanyahu Is Down But Not Out Of Israel's Upcoming Elections 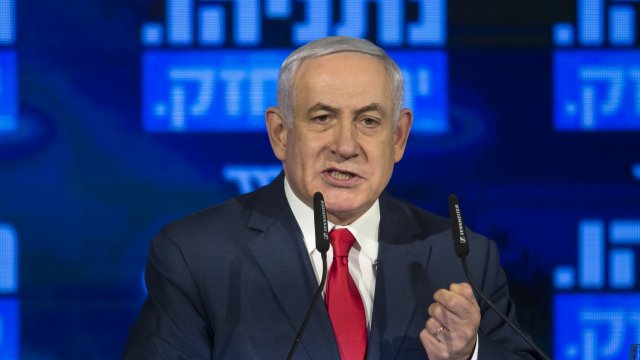 Israel's upcoming election could spell trouble for Prime Minister Benjamin Netanyahu — but his opposition is also facing an uphill battle.

Israeli Prime Minister Benjamin Netanyahu is facing a tough re-election in a few weeks. The scandal-plagued prime minister is more vulnerable than ever, but his opposition also doesn't have a clear path to defeating him.

Netanyahu is facing indictment from the country's Attorney General in three separate corruption cases, the most serious of which alleges he gave out favors to a large media company in return for positive press coverage.

The charges haven't swayed many voters so far, but this election is shaping up to be close enough that even a small impact on the polls could spell disaster for Netanyahu. The announcement also puts the prime minister's legal troubles in the spotlight ahead of the vote.

Yohanan Plesner, President of the Israel Democracy Institute, told Newsy: "Now the election is not only about, say security in the economy, it's also about corruption. And what do you think about the likelihood of having a prime minister under an indictment."

The prime minister may become the first in Israeli history to be criminally prosecuted while in office.

By combining their parties, Gantz and Lapid have a shot of garnering more seats in Israel's parliament, the Knesset, than Netanyahu's Likud party. Usually, that would give them the first shot at forming a new government.

But having the biggest party doesn't guarantee victory — whoever wins the election still has to weld together a majority coalition from other parties to actually make a government. Right now, it's not clear either side can unite the 61 seats needed for a majority.

Israel's elections take place on April 9th. The country's president will then select one of the party leaders to try and form a majority government out of the results — a normally symbolic decision that could be more difficult to make this time around.

Plesner told Newsy: "For the first time we're entering, potentially depending on the outcome of the election, a more ambiguous scenario. ... It will put both the president in a dilemma and it will generate sort of a real difficulty that might lead to the emergence of all sorts of unexpected scenarios."