Netanyahu Requests Immunity From Prosecution Ahead Of Election 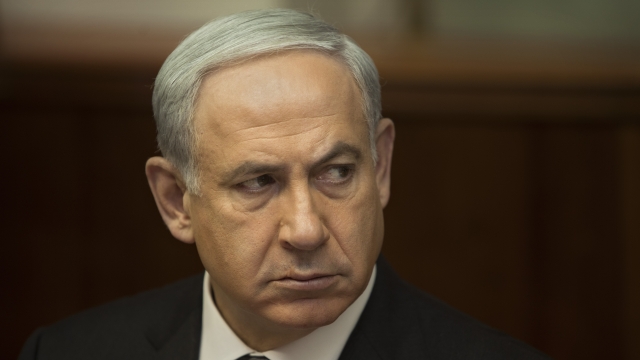 Israeli Prime Minister Benjamin Netanyahu is denying wrongdoing in corruption cases and is asking Parliament to grant him immunity.

Israel's Prime Minister Benjamin Netanyahu is seeking immunity from prosecution in three separate corruption cases ahead of the country's election in March.

Netanyahu was formally indicted on charges of bribery, fraud and breach of trust last month. His immunity request will be taken under consideration by parliament’s house committee and if approved, sent for a full legislature vote.

Netanyahu has repeatedly denied any wrongdoing in all three cases and has asked parliament to support him in this immunity request.

"The immunity law is intended to protect elected officials from fabricated legal proceedings. From political indictment intended to damage the will of the people," Netanyahu said.

Netanyahu's political rival in this upcoming election, Benny Gantz, is condemning the request.

On Twitter, Gantz says, "I never imagined that we would reach the day when the Israeli prime minister refrained from appearing before the law. Netanyahu is suspected and charged with taking bribes — and guilty of dragging the State of Israel and its citizens hostage to his legal battle."

According to CNN, immunity from prosecution would only apply to the country's current parliament. So if Netanyahu does receive immunity, he would still have to request immunity again after another election.

If he doesn't receive immunity and if he's ultimately convicted, he faces up to 10 years in prison for the bribery charge and as many as three years for the fraud and breach of trust charges.