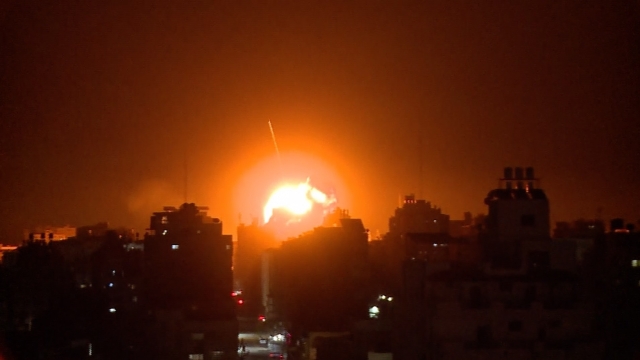 The two sides began bombing each other after seven people were injured Monday in an attack.

Violence between Hamas and Israel continued Tuesday morning in Gaza, as a potential ceasefire appears to have fallen apart.

Egypt helped broker a ceasefire between the two sides on Monday. But overnight, Hamas fired more than 60 rockets into Israel, according to the Jerusalem Post.  The outlet reports the Israeli military carried out hundreds of strikes in Gaza in response, targeting Hamas security force buildings and military compounds.

Israeli Prime Minister Benjamin Netanyahu, who cut his visit to the U.S. short in response, quelled rumors of a truce Tuesday.

"And I can tell you, we are prepared to do a lot more. We will do what is necessary to defend our people and to defend our state."

The two sides began bombing each other after an attack Monday. Israel Defense Forces said a homemade rocket was fired from Gaza into Israel destroying the home of a British-Israeli family. Among the injured were an infant and two children. Officials have accused Hamas of the attack.

The increased tension could lead to another major conflict between Israel and Hamas. The 2014 war killed more than 2,000 Palestinians, over half of them were civilians. Six civilians and 67 soldiers were killed in Israel.