Netanyahu Vows To Stay In Office Despite Bribery And Fraud Charges 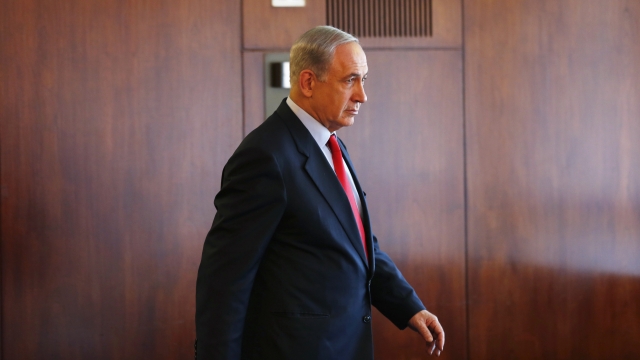 The Israeli prime minister was indicted on charges of bribery, fraud and breach of trust on Thursday.

Israeli Prime Minister Benjamin Netanyahu is vowing to hold on to power after being indicted on charges of bribery, fraud and breach of trust.

In a speech after the indictment was announced, Netanyahu criticized the charges as an "attempted government coup," saying, "I will not let the lie win. I will continue to lead the country according to the law."

It marks the first time in Israel's history that a sitting prime minister has faced criminal charges. But Israel's attorney general said Thursday that the indictment shows that no one is above the law.

The charges stem from three separate corruption investigations against Netanyahu. The first alleges he exchanged regulatory favors to the shareholder of an Israeli telecom giant in exchange for favorable coverage. The second alleges the prime minister and his family wrongfully accepted lavish gifts from two wealthy businessmen. And the third case alleges Netanyahu offered advantageous law for a newspaper in exchange for positive news coverage.

Netanyahu's repeatedly denied any wrongdoing in all three cases and is now calling for "the investigators to be investigated." If he's convicted, Netanyahu would face up to 10 years in prison for the bribery charge and as many as three years for the fraud and breach of trust charges.

In the meantime, Netanyahu is not required to resign from office. But he only has 30 days to try to block the indictment by asking lawmakers for parliamentary immunity.

That process is complicated since Israel's legislature isn't fully functioning right now. That's because Netanyahu and his political rival Benny Gantz have each failed to form a governing coalition. Local outlets report this political deadlock means it could be months before the attorney general is able to formally file charges against Netanyahu.