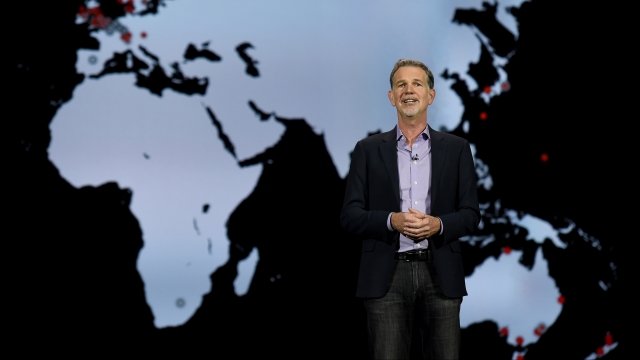 Netflix's global position has brought with it geopolitical challenges that may be more than what it bargained for as an entertainment company.

["Today, right now, you are witnessing the birth of a global T.V. network."]

Netflix is really proud of the fact that it's a global media platform. And from a financial standpoint, the company's strategy to provide content in more countries has been wildly successful. As of October 2018, Netflix had almost 80 million subscribers outside of the U.S., generating around 4 billion dollars in total revenue for that quarter alone.

But entering the global arena has exposed Netflix to global challenges, too.

In both instances, Netflix kept the series on its platform. In defending "Amo," Netflix said: "We understand that viewers may have opposing opinions but leave it to them to decide." According to a Reuters report, a group of Hollywood executives said the call to drop "Fauda" was a "blatant attempt at artistic censorship."

The men Saudi Arabia has accused of murdering journalist Jamal Khashoggi had their first day in court Thursday.

Until now, Netflix has remained diplomatic with such statements justifying its politically-charged content. But at the start of 2019, the streaming company faced an official complaint from Saudi Arabia's government.

["...blocking an episode of a comedy show in Saudi Arabia after Kingdom officials complained about it."]

The show in question was "Patriot Act with Hasan Minhaj," and the episode — now removed in Saudi Arabia — criticized Saudi Crown Prince Mohammed bin Salman and the United States' allyship with the Kingdom.

The company's decision to comply with the request prompted a New Yorker columnist to write: "Netflix ceded editorial control of content to an autocratic regime." The streaming company said in defense: "We strongly support artistic freedom worldwide and only removed this episode in Saudi Arabia after we had received a valid legal request."

A Netflix spokesperson later told CNN: "It doesn't mean we agree with these laws." And a former 21st Century Fox executive added that conceding to remove one episode might have allowed the whole series to remain. For what it's worth, the episode is still available in Saudi Arabia through the show's YouTube page.

As long as Netflix remains in the international media space, it will continue to face international legal challenges. Even before Saudi Arabia's complaint, the streaming company had to comply with the obscenity regulations of countries like New Zealand, India and Indonesia.

Many of those regulations have more to do with decency and appropriateness than geopolitical censorship. But it's worth questioning if Netflix can actually resist the latter in the face of authoritarian governments. If the company's response to Saudi Arabia offers any indication, Netflix might soon have to realize that content is not king.