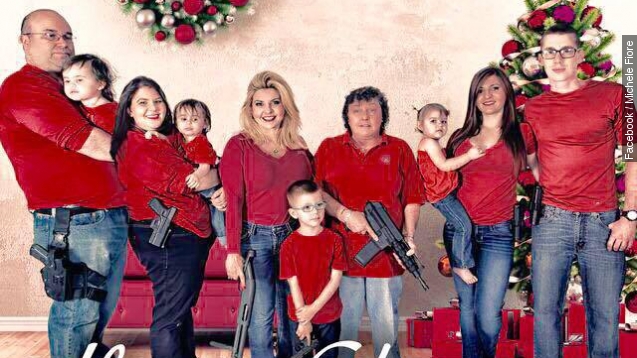 Las Vegas assemblywoman Michele Fiore posted a picture to Facebook of herself and other family members carrying assorted firearms.

We've all been there for the family Christmas photo — scrambling around the house to get the right shirt on, trying to get everyone to smile at the right time, making sure the safety on your handgun is on ...

Las Vegas assemblywoman Michele Fiore is getting plenty of reactions to her family Christmas card photo posted to Facebook.

In the photo, Fiore and several members of her family are posing with various guns. Of the 10 family members in the photo, seven are holding guns, including her 5-year-old son, Jake.

Fiore posted the photo on Facebook with the caption: "It's up to Americans to protect America. We're just your ordinary American family.-With love & liberty, Michele." (Video via KVVU)

Fiore got both criticism and praise for the photo. As of Sunday morning, the praise mostly outweighed the criticism on Facebook.

Not surprisingly, Fiore is a lifetime member of the National Rifle Association and is adamant about her support for the Second Amendment — especially on holidays. She posted this photo on Facebook for Mother's Day in 2013. (Video via KLAS)