You Can Now Legally Buy Weed In Nevada 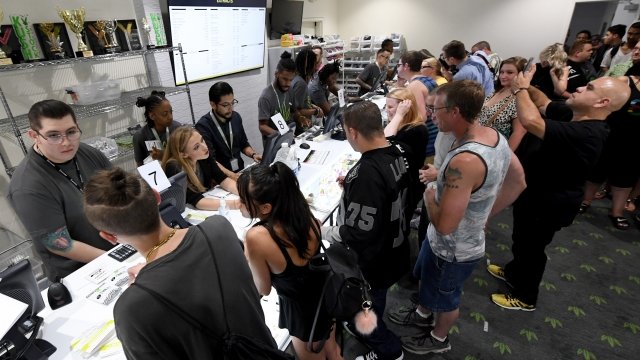 The Silver State is now the fifth to allow recreational marijuana sales.

Demand was high in the Silver State on Saturday as legal sales began. Four states voted to legalize recreational use back in November, but Nevada was the first to offer sales, with the Department of Taxation allowing early sales before the official deadline of Jan. 1, 2018.

California, Maine and Massachusetts voted similarly to Nevada to legalize recreational use; residents of Arkansas, Florida and North Dakota voted to legalize medical use.

But while recreational use is now legal, smoking pot in public still isn't.

Public support for legalized weed is growing, but questions remain as to what the future of legalization looks like on a federal level.

The FDA Wants This Opioid Drug Off The Market

The Food and Drug Administration wants Endo Pharmaceuticals to voluntarily remove the drug from shelves due to "risks related to abuse."

During his campaign, President Donald Trump said he was in favor of states' rights when it came to pot.

But Attorney General Jeff Sessions has been an outspoken opponent of legalization, even going so far as to compare marijuana to heroin.

But there's overwhelming evidence that points to over-prescribed pain pills, not legalized weed, as the root cause for the epidemic.

At least one Trump loyalist is pressuring the president to stick to his word, though. Roger Stone, an unofficial adviser during the campaign, is now lobbying the White House to enact marijuana reform.