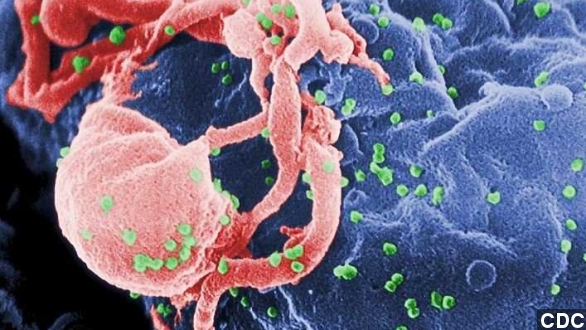 Researchers have found an aggressive new strain of HIV in West Africa. They say it develops into AIDS much faster than other strains.

Researchers have found an aggressive new strain of HIV in West Africa they say develops into AIDS much faster than other strains.

According to a new study from Sweden's Lund University, the strain is a recombinant virus, or a combination of two different viruses that join together in the body to create a completely new virus. (Via Al Jazeera)

And it's pretty strong. Scientists say the new strain can develop into AIDS in just five years. That's up to two and a half years faster than either of its parent strains.

One of the study's authors told Medical News Today, "Recombinants seem to be more vigorous and more aggressive than the strains from which they developed."

So far, the strain has only been seen in Guinea-Bissau, but researchers warn it could spread quickly.

Previous research has shown recombinant strains are making their way around the globe faster than other strains, partly due to immigration to the U.S. or Europe. (Via KTLA)

The study's senior author said: "HIV is an extremely dynamic and variable virus. New subtypes and recombinant forms of HIV-1 have been introduced to our part of the world, and it is highly likely that there are a large number of circulating recombinants of which we know little or nothing. We therefore need to be aware of how the HIV-1 epidemic changes over time." (Via Fox News)

The study comes just a few days after the World Health Organization and the European Centre for Disease Control announced about 131,000 people contracted HIV in Europe in 2012 — an 8 percent jump from the year before.