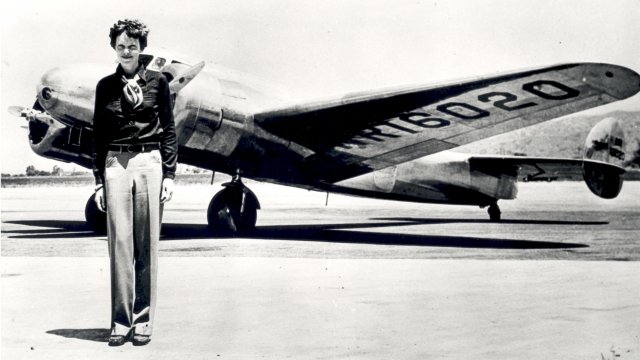 The latest theory claims Earhart survived a crash landing in the Marshall Islands.

The mystery of Amelia Earhart's disappearance has endured for 80 years. The U.S. declared her dead in 1939, concluding she had crashed somewhere in the Pacific Ocean.

But several theories have since emerged about what exactly happened to the pilot and her navigator, Fred Noonan, during their flight.

Most people point to a number of radio calls Earhart sent to the U.S. Coast Guard near Howland Island, where she was set to refuel. Supporters of this widely accepted theory say she might have crashed in the ocean just short of the island.

But a recently rediscovered photograph allegedly shows Earhart on the Marshall Islands. Researchers claim the photo shows a woman and man who resemble Earhart and Noonan. They say the two were blown hundreds of miles off course but survived a crash landing on the islands.

Planes Are More Fuel-Efficient, But That Doesn't Mean They're 'Green'

Advances in aviation technology are reducing fuel burn, but many concepts still have a long way to go.

In 1970, a book suggested Earhart survived a Pacific Ocean plane crash and was taken prisoner by the Japanese. The book claimed U.S. forces rescued her during World War II and that she was living in New Jersey under the name Irene Bolam. This theory might have held up — except the real Irene Bolam denied the claims and sued the author and publisher.

And in 2016, a team of researchers claimed human remains found on the uninhabited island of Nikumaroro were Earhart's. They recovered other evidence, including aluminum sheets that might have come from Earhart's plane. The scientists suggested she and Noonan crashed on the island and later died as castaways. But the bones were never confirmed to belong to Earhart.

Without any definitive evidence, all of these theories remain just that. We might never know what really happened to the famed aviator.