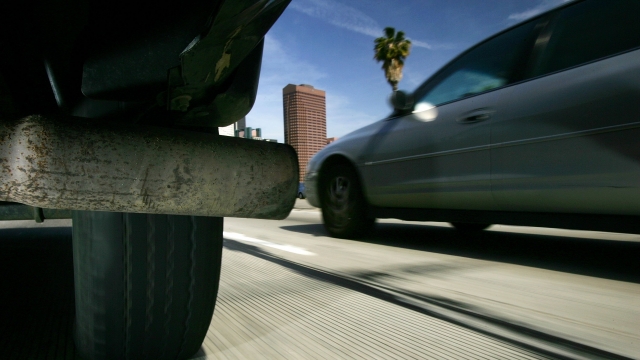 A study published in The Lancet Planetary Health suggests more than one in 10 childhood asthma cases may be linked to traffic pollution each year.

"The numbers we found suggest that this is a serious public health issue that needs to be tackled," said Dr. Ploy Achakulwisut,

A study released Wednesday in The Lancet Planetary Health suggests that traffic-related pollution is linked to 4 million new cases of childhood asthma each year.

Researchers looked at nitrogen dioxide pollution and how it impacts the health of children in 194 countries and 125 major cities around the world.

It's not the first study to connect air pollution with pediatric asthma. But the study's lead author, Dr. Ploy Achakulwisut, says it's the first to give a comprehensive picture of the issue.

According to the research, more than one in 10 childhood asthma cases may be linked to traffic pollution every year. The U.S. ranked 25th on the list of countries with the highest proportions of those cases.

"We're finding that 19 percent of all cases of childhood asthma instances can be attributable to traffic pollution in the U.S. So this is kind of a surprising result for the U.S.," she said.

Health experts say asthma is the one of the most common chronic diseases in children.

"Asthma is a lifelong condition; we don't currently have a cure for it so once you develop it as a child, it's a lifelong affliction," said Achakulwisut. "So it’s important from a public health standpoint that we're thinking about mitigation policies to improve children's health"

One suggestion is re-evaluating the WHO's pollution guidelines. Another is improving access to cleaner forms of transportation.

Achakulwisut also pointed to London's recent implementation of a new pollution charge for certain cars that drive into a highly-trafficked part of the city. The move aims to cut down on the number of pollution-emitting cars and curb health risks related to harmful emissions, like asthma and cancer.

But there could be even more serious adverse health effects.

"We know from medical studies and other studies that other harmful pollutants, like flying particulate matter in ozone, also cause a range of adverse health outcomes ranging from asthma to more serious outcomes like lung cancer, strokes and heart disease, as well as emerging evidence that it could affect childhood development and have neurodegenerative outcomes, as well," Achakulwisut said.

It's not clear exactly which pollutant triggers the development of asthma, but U.S. environmental regulators seem to agree with the study's authors that there's a causal relationship between long-term nitrogen dioxide exposure and childhood asthma.