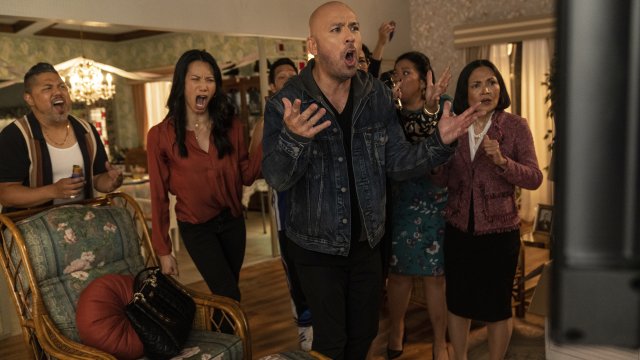 The new comedy "Easter Sunday" is purposefully out in theaters now, filled with Easter eggs meant to reach and celebrate a Filipino audience.

It’s written by Ken Cheng and loosely based on the life of Cheng and Filipino- American comedian Jo Koy.

"A lot of times our stories, especially when we're talking about immigrants, focus on what I call the noble struggle of immigration, and we never get to relish in the joy and happiness and the laughter and the comedy of that experience," Cheng said.

The film gives nods to classics like "It’s a Wonderful Life" and "Friday."

"A one-day movie in which a variety of hijinks and subplots sort of converge into a dramatic moment at the end of the movie," Cheng said.

The movie is filled with little things — or Easter eggs — meant to reach and celebrate a Filipino audience.

"All the food that's included in the movie are literally written verbatim in the screenplay," Cheng said. "It's like, this is the dish you should be cooking here... She's offering a dessert, and the dessert should be this, Polvoron."

A recurring struggle in the film is its central character’s difficulty navigating stereotypes in Hollywood.

Some Filipino-Americans are attempting to facilitate conversations about their cultural dishes as they become more popular with a broader audience.

According to a study from CAPE and the Geena Davis Institute, about a third of API characters — 35.2% — embody at least one common API trope or stereotype such as the “Martial Artist," the “Model Minority" or the “Exotic Woman.”

KEN CHENG: It does make sense. For me, the priority is I think that it's a natural byproduct of allowing characters to just be human on screen. That makes sense if you are able to express these characters humanity. I don't see how you would laugh at them.

There was brief talk about moving Easter Sunday and its all star cast of AAPI actors to streaming due to COVID-19, but filmmakers tell Newsy they and Koy had their hopes set on something bigger.

"These are people we do not see on the big screen often, if ever, and it was really important to him and really important to us as producers involved, and to the studio frankly, that that we get to present this movie the way we intended to," Cheng said.

In a movie titled "Easter Sunday," there are obviously themes of faith.

According to Harvard Divinity School, 90% of people in the Philippines are Christian, with the majority Catholic.

"We can all debate about the origins of why Catholicism specifically played such an important role as a byproduct of colonialism in the Philippines, but it is undeniably such a large part of the Filipino and Filipino American specifically experience," Cheng said.

"Church is, frankly, one of the central hubs of the community in which people find community, especially newly arrived immigrants who don't know anybody else in this country," Cheng said. "That's where they go to find their countrymen there,  find solidarity and sort of a sense of collective belonging."

"Easter Sunday" is now playing, purposely, in theaters only.