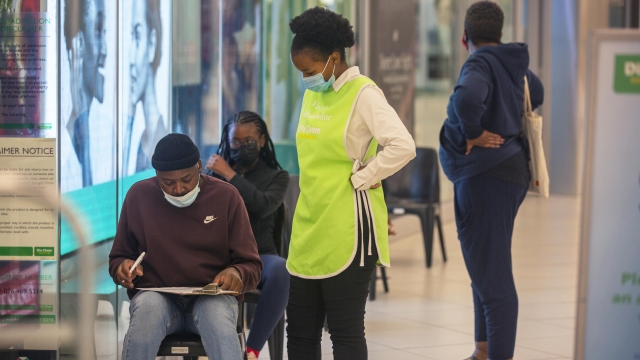 The U.S. will restrict travel from South Africa — where the variant originated — and seven other countries in the region beginning Monday.

The discovery of a new coronavirus variant sent a chill through much of the world Friday as nations raced to halt air travel, markets fell sharply and scientists held emergency meetings to weigh the exact risks, which were largely unknown.

In response, the United States joined the European Union and several other countries in instituting travel restrictions on visitors from southern Africa — where the variant was first detected.

According to the World Health Organization, the variant is heavily mutated, more transmissible and may evade immunity.

The White House said the U.S. will restrict travel from South Africa and seven other countries in the region beginning Monday. It did not give details except to say the restrictions will not apply to returning U.S. citizens or permanent residents, who will continue to be required to test negative before their travel.

A World Health Organization panel named the variant “omicron” and classified it as a highly transmissible virus of concern, the same category that includes the delta variant, the world's most prevalent. The panel said early evidence suggests an increased risk of reinfection.

Medical experts, including the WHO, warned against any overreaction before the variant that originated in southern Africa was better understood. But a jittery world feared the worst nearly two years after COVID-19 emerged and triggered a pandemic that has killed more than 5 million people around the globe.

There was no immediate indication whether the variant causes more severe disease. As with other variants, some infected people display no symptoms, South African experts said.

Even though some of the genetic changes appear worrisome, it was unclear if the new variant would pose a significant public health threat. Some previous variants, like the beta variant, initially concerned scientists but did not spread very far.

The 27-nation European Union imposed a temporary ban on air travel from southern Africa, and stocks tumbled in Asia, Europe and the United States. The Dow Jones Industrial Average dropped more than 1,000 points. The S&P 500 index was down 2.3%, on pace for its worst day since February. The price of oil plunged nearly 12%.

The variant has yet to be detected in the United States, said Dr. Anthony Fauci, the U.S. government's top infectious disease expert. Abroad, the variant “seems to be spreading at a reasonably rapid rate,” he told CNN. And although it may be more transmissible and resistant to vaccines than other variants, "we don’t know that for sure right now.”