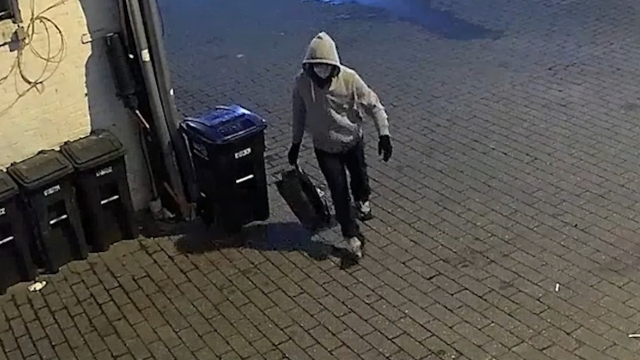 Little has been revealed about that federal probe, but a Newsy investigation shows several theories the FBI is pursuing.

It may be the biggest unsolved mystery of Jan. 6: Who planted a pair of pipe bombs just steps away from the U.S. Capitol?

"What was the purpose of those devices being planted? Was it a diversionary type of a tactic used by some of these rioters?" acting U.S. Attorney Michael Sherwin questioned.

A person was captured in videos in a hoodie, face mask, glasses and gloves. They placed two pipe bombs near the Republican and Democratic National Committees on the cold, dark evening before the Capitol siege. After the bombs were found undetonated, the FBI turned to the public:

"I'm coming to you today to, once again, ask for your help with our pipe bomb investigation," Washington Field Office Assistant Director in Charge Steven D'Antuono said.

Little has been revealed about that federal probe, but a Newsy investigation reveals several theories the FBI is pursuing.

A source familiar with the FBI's investigation says agents have repeatedly retraced the bomber's path on foot, the most recent visit to Washington's Capitol Hill neighborhood on Dec. 22. After piecing together a route, primarily with Ring camera footage from nearby homes, they believe the suspect first drove into the city with the explosives and parked a vehicle in a rare surveillance blind spot. The source tells Newsy agents think the bomb material — which includes galvanized pipe and kitchen timers — was acquired outside the nation's capital. The FBI is also said to believe that the bomber seen in the videos may be an anarchist or someone who felt wronged by the government.

Barry Black is a retired FBI special agent and master bomb technician. He says the suspect was clearly trying to avoid detection, but the pipe bombs themselves could have given investigators valuable information.

"Unlike (on) television, these cases are rarely solved in 60 minutes. These are complex investigations," he said. "As you create devices like this, you're leaving forensic evidence. The potential for fingerprints, hairs, DNA — even touch DNA, which is down to a cellular level — the FBI's explosives unit can examine materials like that in very fine detail and glean a lot of information. And then, as the investigation continues, would have something to match what was recovered on scene with a potential subject."

There are conflicting opinions about whether the person was connected to the pro-Trump mob that stormed the seat of U.S. democracy.

"I imagine the FBI probably knows who he was," former President Donald Trump  said. "And I guarantee he wasn't one of the people that were at that protest."

"I think there was a significant coordination with this attack," former Capitol Police Chief Steven Sund said.

The FBI declined to comment on specifics and pointed Newsy to its public releases.

It's offering a $100,000 reward for information that can help the agency catch the person who has so far eluded arrest and prosecution.