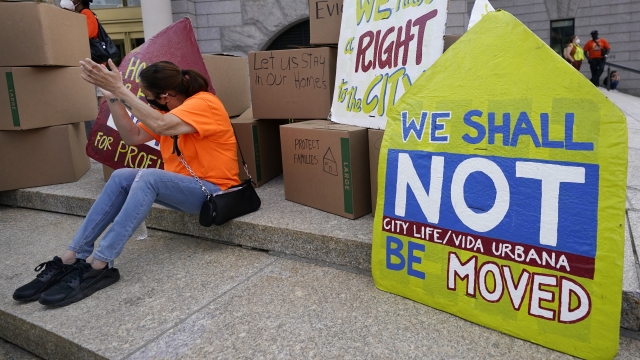 Congress has already approved almost $47 billion for housing aid, but most of the money hasn't reached those who need it yet.

The Biden administration's new eviction moratorium is heading to court.

Lawyers for a group of landlords are asking a federal judge to put a pause on the new guidance.

The new ban from the CDC covers 90% of renters in the U.S. and keeps landlords from evicting certain tenants who can't make rent during the pandemic.

President Biden let the old moratorium expire and said extending it wouldn't hold up in court.

Even when announcing the new ban, he admitted it would face legal challenges and said at the very least it would buy some time for Americans facing eviction.

"This is also going to be a temporary solution regardless and a longer-term solution will require legislative action," said White House Press Secretary Jen Psaki. "But his message to anyone who's been a passionate advocate is that he shares their concerns, he shares their commitment, he wants renters to be able to stay in their home and that's why we took this step over the last few days."

In June, the Supreme Court ruled to allow the moratorium to stay in place through July, but Justice Kavanaugh said after that, Congress would need to approve another extension.

Also, Congress has already approved almost $47 billion for housing aid, but most of the money hasn't reached those who need it yet.