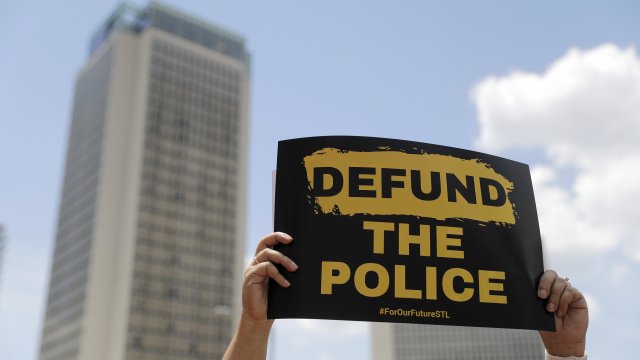 The BREATHE Act has been endorsed by Reps. Ayanna Pressley and Rashida Tlaib but hasn't been officially introduced in Congress.

PRESSLEY: "Our communities have been making these demands for decades, but for too long, policymakers have chosen not to listen. This is an old fight, but it's a new day."

This week, Reps. Ayanna Pressly and Rashida Tlaib became the first two members of Congress to endorse the BREATHE Act — proposed legislation that would dramatically change the criminal justice system by greatly reducing the role of police, jails and prisons.

Unlike the House police reform bill, the Breathe Act seeks to reward cities and counties with federal dollars that defund their police departments and close their jails rather than just reform them.

HENDERSON: "I think the Breathe Act is a recognition that we will not put 2014 solutions on 2020 problems."

Ash-Lee Henderson is a longtime member of The Movement for Black Lives, a coalition of more than 150 minority advocacy organizations and the creator of this legislation.

HENDERSON: "There's a real opportunity in this moment, if you have ever been upset about police brutality, and if you've ever been upset about all the other incredible services, that that could be actually making a difference in your community, if they just had a little bit more financial support. This is the moment where that can change. … It's our generation's articulation of what we want, and not just simply what we would concede to."

This call for reform comes in response to a string of killings of Black people by White police officers that led to historic sustained protests in all 50 states.

The touchstone of those protests being the death of George Floyd, who was killed in Minneapolis after an officer kneeled on his neck for nearly nine minutes. According to newly released transcripts of the incident, Floyd told the officers involved "I can't breathe" more than 20 times.

The BREATHE Act is broken up into four main components, including divestment from police and prisons; investment in new community safety measures and community enrichment programs; and accountability measures for bad actors in the criminal justice system.

This bill comes at a time when several major cities across the country, including New York, Baltimore, Minneapolis and Los Angeles, have either passed or promised to pass defunding measures aimed at local police forces.

But there are many who don't support this type of legislation on the right and the left.

HOUSE SPEAKER NANCY PELOSI: "We want to work with our police departments. There are many who take pride in their work and we want to be able to make sure the focus is on them."

Plus, a poll by the Pew Research Center found just 25% of Americans say spending on policing in their area should be decreased.

Still, Henderson believes this is the best chance activists have ever had at major structural reform.

HENDERSON: "They would have told us that it wasn't possible to have people in the streets in all 50 states and 18 different countries, right? They would have told me that defunding and divesting from police forces and investing in Black communities was a pipe dream. Right? And look what we proved to them in the matter of months. … The power of Black people and our allies of all races and ethnicities and nationalities is more powerful and makes more of the impossible possible every day."

Along with significant changes to the criminal justice system, the bill also calls for a commission to study reparations for Black Americans and expands voter access for formerly incarcerated individuals and undocumented immigrants. As it stands, no members of Congress have formally introduced the bill.