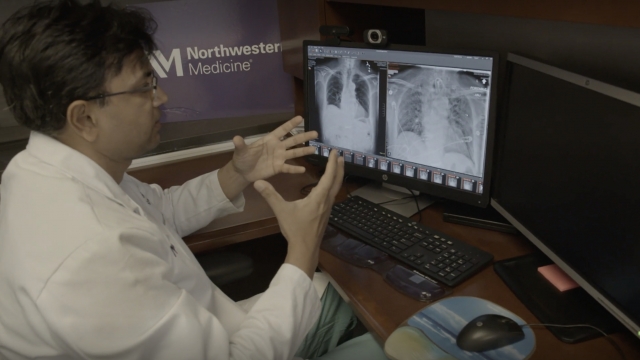 His surgery is uncommon. Doctors diagnosed him with stage four lung cancer at the start of the pandemic.

Northwestern Medicine in Chicago shared this video with us.

"They've never done it before because cancer usually spreads all over body, bones, brain, stomach, and they don't want to waste their lungs on the person that doesn't have a chance to live," Khoury said.

Surgeons were able to operate because the cancer hadn't spread beyond Khoury's lungs.

Now, his pulmonary surgeon and oncologist are creating a new set of protocols for treating lung cancer patients and starting a clinical registry to track their progress over time.

Research has shown cancer screenings slowed down when there have been waves of COVID.

"Individuals were less likely to go out to facilities and interact with individuals in a pandemic," Dr. Albert Rizzo said. "And many of the lung cancer screening sites were also shutting their doors for a period of time for the same reasons. By the time symptoms develop from lung cancer, often means it's more advanced and therefore less likely to be able to be cured."

Lung transplant numbers overall are also rising. Data from the United Network for Organ Sharing, also known as UNOS, shows about 1 in 10 lung transplants were for patients with severe damage after recovering from COVID-19.

In 2022, people waiting on the UNOS wait list for lungs has jumped from 48 new patients waiting the first week of January, to 86 new additions last week.

"As the indications for transplants is growing and as that as the need is growing, clearly, we recognize that there is a demand supply discordance," he said.

Newsy spoke with him when hospitals nationwide were just starting double lung transplants for COVID patients. By then, he had done 20.

As for Khoury, he's slowly healing and doctors say he'll be on immunosuppressants all his life.

But he says he's ready to live it. His message: "For anybody who has cancer ... Just stay strong, fight and don't stop. Things all have been good," Khoury said.