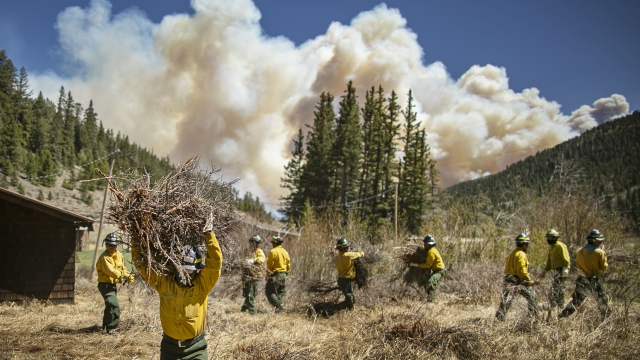 The largest wildfire has charred more than 468 square miles over the last 42 days, and evacuation orders remain in place for some villages.

New Mexico's governor said Tuesday that given the ferocity and swift movements of a record-setting wildfire burning in the northeastern part of the state, the damage will be significant with estimates of burned homes and other structures likely to range between 1,000 and 1,500.

Gov. Michelle Lujan Grisham stressed that was only a rough estimate but likely not an exaggeration, saying it's clear to state and federal officials that there are many victims who have lost their homes and have had their businesses affected.

"And their families are suffering," the governor said during a news conference with Federal Emergency Management Agency Administrator Deanne Criswell and top state officials. "And that's my takeaway, the number of families that we have to help."

The fire has charred more than 468 square miles over the last 42 days to earn the distinction of being the largest fire in the arid state's recorded history. It's also the largest fire currently burning in the U.S.

Evacuation orders remain in place for some villages. Crews have been working on multiple fronts around the fire's massive perimeter to herd the flames around homes by building more dozer lines, clearing brush, raking pine needles and setting up sprinkler systems.

A fraction of an inch of precipitation fell over parts of the fire Monday, but a meteorologist assigned to the blaze said those places along the perimeter that needed it most missed out on the moisture.

Fire managers said during a briefing Tuesday evening that they were concerned about potentially erratic winds that could result from thunderstorms that will cross the area.

Lujan Grisham warned that many residents, depending on whether they live, should be ready for potential evacuations all summer given the likelihood for higher fire danger due to strong winds, warmer temperatures brought on by climate change and forecasts for little to no precipitation.

Officials with three of New Mexico's five national forests announced that closure orders will take effect Thursday, prohibiting public access because of active wildfires and extreme fire danger. All of the Santa Fe National Forest will be off limits along with the Cibola National Forest that borders Albuquerque and the Carson National Forest in far northern New Mexico.

Another fire burning in the Gila National Forest in southern New Mexico had grown more than 57 square miles in one day, causing concern among state officials. Forest roads and trails in the area were closed.

Near the community of Los Alamos, crews made progress on keeping another fire within its containment lines. That blaze was behaving differently given that it was moving through the burn scar of a 2011 wildfire.

Federal officials acknowledged during Tuesday's briefing that recovery for northern New Mexico will be a long process and that the initial aid provided through emergency programs was not meant to make people whole but rather provide reimbursements for lodging, medical expenses and emergency home repairs. More than 2,000 people already have registered with FEMA.

Lujan Grisham recognized the emotions that many people are feeling after losing homes and property that have been in their families for generations — and in some cases for centuries. She said the goal of state and federal officials is to save all lives and as many properties as possible.

"We have lives to put back together," she said, adding that she was hopeful Congress would approve pending legislation that would allow additional damages to be paid to New Mexico residents and business owners.

Officials with the U.S. Forest Service announced Tuesday that a special team will begin assessing the cooler areas of the fire to determine what needs to be done to protect against post-fire events like erosion and flooding.

The team will use ground and aerial surveys, satellite imagery and computer models to evaluate conditions and recommend emergency treatments.

Similar work is underway in southern New Mexico and in northern Arizona where early-season wildfires burned homes in forested communities.

Nationwide, more than 2,140 square miles have burned so far this year — the most at this point since 2018, according to the National Interagency Fire Center.