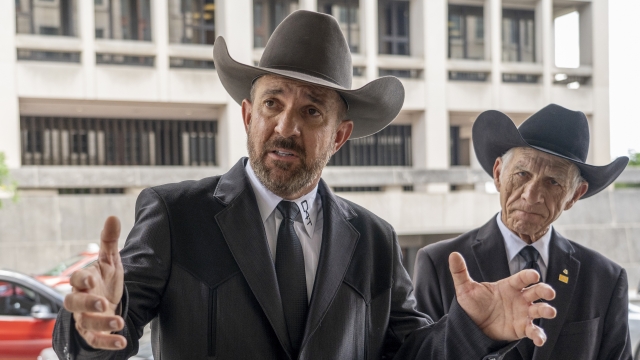 Otero County Commissioner Couy Griffin was previously convicted of a misdemeanor for entering the Capitol grounds during the insurrection.

A New Mexico state district court judge on Tuesday disqualified county commissioner and Cowboys for Trump cofounder Couy Griffin from holding public office for engaging in insurrection at the U.S. Capitol on Jan. 6, 2021.

The judgment from state District Court Judge Francis Mathew permanently bars Griffin from federal and local public office. It arrived amid a spate of lawsuits aimed at sidelining political candidates and elected officials linked to the Capitol riots.

Griffin was previously convicted in federal court of a misdemeanor for entering Capitol grounds on Jan. 6, without going inside the building. He was sentenced to 14 days and given credit for time served.

The new ruling immediately removes Griffin from his position as a commissioner in Otero County in southern New Mexico. He also is barred from serving as a presidential elector.

“Mr. Griffin aided the insurrection even though he did not personally engage in violence," Mathew wrote. "By joining the mob and trespassing on restricted Capitol grounds, Mr. Griffin contributed to delaying Congress’s election-certification proceedings.”

Griffin said he was notified of his removal from office by Otero County staff, who prevented him from accessing his work computer and office space at a county building in Alamogordo.

Griffin, who served as his own legal counsel at a two-day bench trial in August, called the ruling a “total disgrace” that disenfranchises his constituents in Otero County.

“The actions that are being taken are, I believe, perfect evidence of the tyranny that we're right now living under,” Griffin said. “The left continues to speak about democracy being under attack, but is this democracy? Whenever you're removed from office by the civil courts by the opinion of a liberal judge?”

A flurry of similar lawsuits around the country are seeking to punish politicians who took part in Jan. 6 under provisions of the 14th Amendment to the U.S. Constitution, which holds that anyone who has taken an oath to uphold the Constitution can be barred from office for engaging in insurrection or rebellion.

The provisions were put in place shortly after the Civil War.

At trial, Griffin invoked free speech guarantees in his defense and argued that removing him from office would cut against the will of the people and set a “dangerous precedent.” Elected in 2018, Griffin withstood a recall vote last year but isn’t running for reelection or other office in November.

Mathew wrote that Griffin's arguments “disregard that the Constitution itself reflects the will of the people.”

Griffin “overlooks that his own insurrectionary conduct on January 6 sought to subvert the results of a free and fair election, which would have disenfranchised millions of voters.”

Griffin is among a dozen people charged in the Jan. 6 riot that had either held public office or ran for a government leadership post in the two and a half years before the attack. Of those, seven have been convicted of crimes for their participation.