New Orleans Could Be Without Power For Weeks 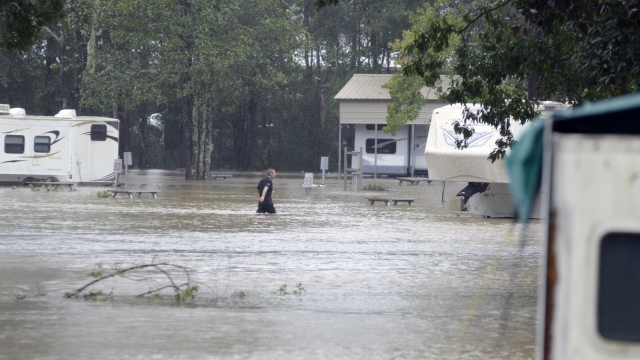 More than 1 million people in Louisiana are without power after the storm made landfall as a Category 4 hurricane.

With power likely to be out for weeks, John Pope said he would survive without electricity -- with help from neighbors who have a generator -- until a scheduled trip out of town next week.

Ehab Meselhe, a professor in Tulane’s engineering school, planned to head out of town once he and his wife finished cleaning up the tree branches and limbs littering their yard. “I have another house in Lafayette,” he said. “Once power is back, we’ll come back.”

A few blocks away, Hank Fanberg stuffed hurricane debris into a garbage back as generators roared on either side of his lightly damaged house. He said neighbors on both sides have generators and they have both already offered, "so we’re going to be in good shape in terms of some electricity.”

Sitting on a screened porch while listening to a battery-operated radio and feeding her one-year-old daughter, Pamela Mitchell wasn’t sure what she would do. She had already spent a hot and frightening night at home while Ida’s winds shrieked. She was thinking about trying to leave. But her 14-year-old daughter, Michelle, was determined to stay, preparing to clean out the refrigerator and put perishables in an ice chest. “We went a week before -- with Zeta,” she said, recalling the hurricane that hit the city last fall. “So, we’ll be all right.”

Rescuers set out in hundreds of boats and helicopters to reach people trapped by floodwaters and utility crews mobilized Monday after a furious Hurricane Ida swamped the Louisiana coast and made a shambles of the electrical grid in the sticky, late-summer heat.

One of the most powerful hurricanes ever to hit the U.S. mainland weakened into a tropical storm overnight as it pushed inland over Mississippi with torrential rain and shrieking winds, its danger far from over.

Ida was blamed for at least one death — someone hit by a falling tree outside Baton Rouge. But with many roads impassable and cellphone service knocked out in places, the full extent of its fury was still coming into focus.

Christina Stephens, a spokesperson for Gov. John Bel Edwards, said that given the level of destruction, “We’re going to have many more confirmed fatalities.”

“For the most part, all of our levees performed extremely well -- especially the federal levees -- but at the end of the day, the storm surge, the rain, the wind all had devastating impacts,” Edwards said. “We have tremendous damage to homes and to businesses.”

All of New Orleans lost power right around sunset Sunday as the hurricane blew ashore on the 16th anniversary of Katrina, leading to an uneasy night of pouring rain and howling wind.

When daylight came, streets were littered with tree branches and some roads were blocked. While it was still early, there were no immediate reports of the catastrophic flooding city officials had feared.Four Louisiana hospitals were damaged and 39 medical facilities were operating on generator power, the Federal Emergency Management Agency said. Officials said they were evacuating scores of patients to other cities.

Preliminary measurements showed Slidell, Louisiana, got at least 15.7 inches of rain, while New Orleans received nearly 14 inches, forecasters said. Other parts of Louisiana and Mississippi, Alabama and Florida got 5 to 11 inches.

In the last 72 hours we have activated 4,900 Guardsmen, staged 195 high-water vehicles, 73 rescue boats, 34 helicopters ready to assist in the recovery from Hurricane #Ida. #ProtectWhatMatters pic.twitter.com/VxQRUyK1u2

More than a million customers in Louisiana and Mississippi were without power, according to PowerOutage.US, which tracks outages nationwide. That left them without air conditioning and refrigeration in the dog days of summer, with highs forecast in the mid-80s on Monday, climbing to nearly 90 by Wednesday.

Experts say hurricanes of this magnitude and other devastating weather systems will only become more common because of climate change.

According to the National Oceanic and Atmospheric Administration, parts of the Gulf of Mexico are three to five degrees warmer than average, with greenhouse gas emissions causing the rapid increase.