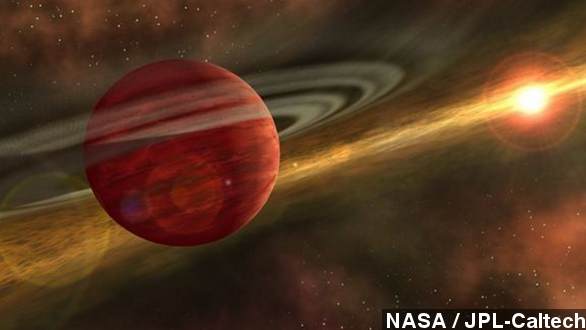 A group of scientists have discovered a distant planet that is 11 times bigger than the largest planet in our solar system: Jupiter. But the size of the exoplanet isn't what's stumping the team of researchers.

The newly discovered planet, dubbed HD 106906 b, orbits a single star, like Earth, but at a distance so far it's baffling scientists. (Via KPNX)

The exoplanet is so far away from its host star, in fact, that according to current planet formation theory, it really shouldn't even exist.

In most commonly accepted planet formation theories, planets that orbit a parent star are thought to begin as relatively small, asteroid-type bodies that got clustered together in the disk of gas and dust surrounding the host star. (Via NASA)

But that theory doesn't explain how a gigantic exoplanet like HD 106906 b formed 60 billion miles away from its host star, more than 650 times the distance of the Earth's orbit from the sun. (Via KMFB)

In comparison, the furthest planet away from the sun in our solar system, Neptune, is only 30 times further away than the Earth's orbit from the sun. (Via Discovery)

The lead researcher, a graduate student at the University of Arizona, says the perplexing planet really doesn't fit any other models of planet or star formation either.

"Systems like this one, where we have additional information about the environment in which the planet resides, have the potential to help us disentangle the various formation models. ... Future observations of the planet's orbital motion and the primary star's debris disk may help answer that question." (Via Space.com)

HD 106906 b was discovered using a thermal infrared camera mounted on a telescope in Chile and was confirmed using data from the Hubble Telescope.