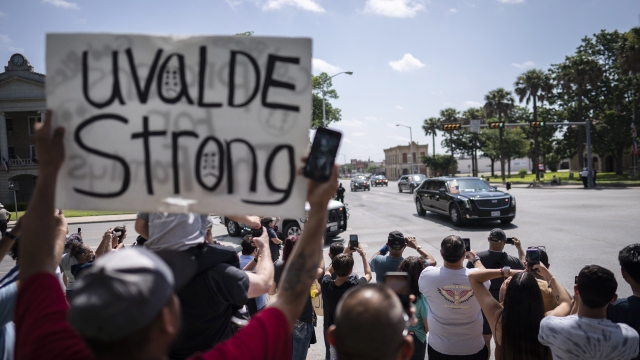 A new report revealed there were at least 11 police officers in the hallway with shields and rifles within three minutes of the gunman entering.

Arnie Reyes, a Uvalde teacher, was the sole survivor in room 111.

"If they would've gone in before, some of them probably would have made it," he said.

Arnie Reyes could hear the help he so desperately needed right outside his classroom as he lay in a puddle of his own blood, surrounded by his dead and dying students.

Police officers in the hallways of Robb Elementary were moving around, but not moving in to confront the gunman right next to him holed up inside room 111.

"You always think, you know, something bad happening that the cops get there so fast, they rush in and they help you, you know? And I was just waiting for that. I was waiting for anybody, anybody to come save us," Reyes said.

Reyes waited well over an hour, 74 agonizing minutes before law enforcement finally entered his classroom and took down the shooter.

A new report reveals there were at least 11 police officers in the hallway with shields and rifles within three minutes of the gunman entering the classroom.  They waited even as they heard sporadic gunfire inside the rooms.

The review found if police had acted sooner, some of the lives lost would likely have been saved.

But notably, in the entire 26-page report, there is only a single mention of the Texas Department of Public Safety.

It's notable, because that agency commissioned the report, even providing access to the evidence.

The sparse mention of DPS officers is fueling speculation the agency is trying to get a pass for its own inaction.

"All of the inconsistencies and all of the finger pointing and all of the walking back leads to only one thing. And I don't know why, or who they're protecting," Gutierrez said.

The last time McCraw spoke publicly about the probe was over two weeks ago when he testified in front of the Texas State Senate.