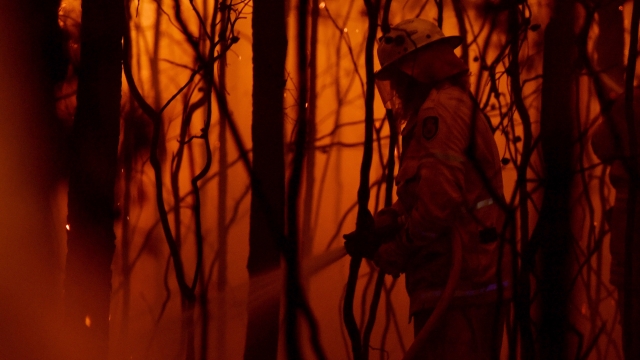 Thousands of firefighters are battling more than 100 fires along Australia's east coast.

Government officials in New South Wales have declared another state of emergency in response to more than 100 fires that are burning along Australia's east coast.

The seven-day emergency declaration will take effect Friday morning local time. It'll give officials the ability to close roads and forcibly evacuate residents from their homes.

Fire authorities have already been urging tourists to leave the state's south coast before Saturday, when weather conditions are expected to deteriorate. The high temperatures and rising winds could significantly impact firefighting efforts.

It's difficult to imagine how much worse it could get. Video shows one fire crew racing through a bush fire to safety on Tuesday.

"It was right on my window and my truck got melted," Deputy Capt. Jasper Croft said.

Conditions became so intense that a flashover formed – meaning the air got so hot that the surrounding area exploded into flames. The firefighters threw on breathing gear, abandoned their truck and fled on foot. Their truck was completely destroyed.

"When we were in there, in the thick of it, we thought that this could be it," Croft said.

The BBC reports at least 18 people have died, including civilians and firefighters, since the fire season began back in September.