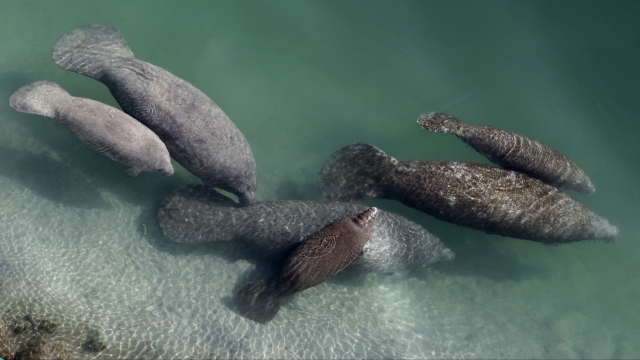 Around 1,100 manatees died in Florida in 2021, the highest number since the earliest available data in the 1970s. Now wildlife officials are taking a step they never have tried before to try to turn the tide.

“We’ve been planning for a year now, realizing what happened last year caught us off guard,” said Thomas Eason, the assistant executive director of the Florida Fish and Wildlife Conservation Commission.

Manatee Deaths In Florida Expected To Reach At Least 1,000 This Year

The Center for Biological Diversity intends to sue the U.S. Fish and Wildlife Service, alleging it failed to revise the manatees' critical habitat.

Eason said there are planned steps to lesson potential consequences of feeding, like monitoring water quality and collecting uneaten food. FWC estimated nutrients added would be an insignificant contribution.

“We will be probably daily but periodically pulling any uneaten food out of the water system. Then the manatees ideally are going to be eating most or all of the food and then their bodies process and pull a lot of those nutrients out so the overall impact should be minor,” said Eason.

So far, the Florida Fish and Wildlife Conservation Commission said there’s little manatee activity at the response station because of unseasonably warm weather. The agency said corrals are working in preventing lettuce from moving outside the trial area.

“For this winter through end of March and for the next couple of years we’ll have it ready to go as needed,” Eason said.

In the meantime, partners around the state are ready to respond to any manatees in need. That includes at Zoo Tampa.

“Manatees are just an incredible species and to see their resilience every day... you know we see some really really hard cases and animals you wouldn’t think survive do and it’s always the greatest feeling when you get to watch them go back home. It’s amazing,” said Marie Filipek, a senior animal care professional.

The zoo rehabilitates manatees and has operated at or near capacity for months. Many animals it works with are from the west coast, which helps free up room at other facilities.

“Luckily the temperatures have been pretty warm so far so we haven’t seen too many but we’re always prepared to take in more manatees and give them the help that they need,” said Filipek.

The zoo has supported an effort to up list manatees to endangered once again. Just at the end of December, FWC said staff responded to a report of a stranded, unresponsive manatee near Merritt Island, and a team took the manatee for care at Jacksonville Zoo.

Though the agency is feeding manatees, others should still not.