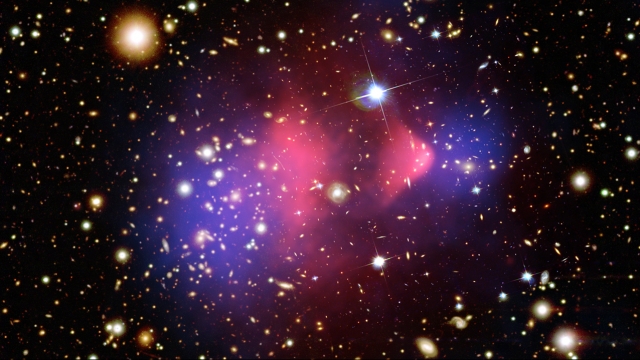 Physicists are trying to answer some of our most fundamental questions, like why anything even exists. It's a subject that might make your brain hurt and one that's baffled scientists for centuries.

To understand this conundrum, we have to go back to the very beginning: the first milliseconds of the Big Bang. As the early universe began to take shape, particles and their equal, yet opposite, counterparts — called antiparticles — annihilated each other and disappeared.

Both were supposed to have been created in equal amounts, so when everything finally settled down, nothing should have been left over. But a tiny portion of matter managed to survive and formed everything we see in the universe today. But it made scientists wonder: What happened to all the antimatter?

Amateur Astronomers May Have Found Our Solar System's Ninth Planet

Scientists may have proof of a ninth planet in our solar system after crowdsourcing some help.

Some physicists blame tiny particles called neutrinos, arguing they are actually their own antiparticles. If this were true, neutrinos would cancel each other out and disappear during atom decay, violating a fundamental law of physics known as lepton number conservation. A process like that would favor matter over antimatter and create an imbalance in the universe.

Other scientists propose some sort of cosmic phenomenon happened during the Big Bang that caused more particles to decay as matter than as antimatter.

And some researchers take a less complicated approach, simply arguing there were always more particles than antiparticles — never equal amounts of both. If that's the case, antimatter never stood a chance.

But regardless of what happened billions of years ago, you can thank matter for your existence.