New Study On Chloroquine's Efficacy May Add To COVID-19 'Infodemic' 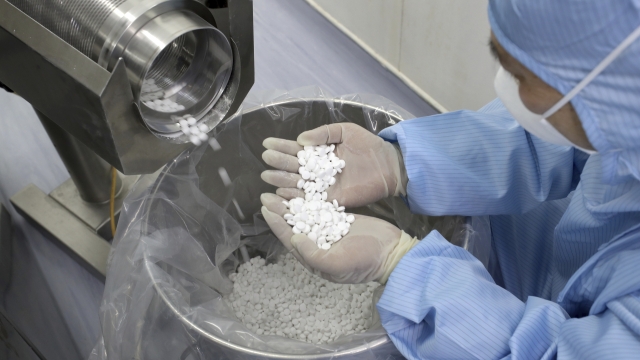 Didier Raoult's claims about chloroquine left scientists and doctors rushing to set the record straight. But a new Chinese study may support him.

Whether you know it or not, Professor Didier Raoult is a key figure in President Trump's COVID-19 response. Since late February, Raoult has published papers which reportedly found that chloroquine and hydroxychloroquine can be effective treatments against COVID-19 — a finding that was amplified by President Trump in press conferences and on social media. There's been a frenzy around the drug since then, but scientists say the methodology behind the studies was flawed enough to make their findings unreliable or misleading. And a new study may add further confusion.

Newsy spoke to Dr. Jeff Linder, chief of general internal medicine and geriatrics at Northwestern Medicine, about Raoult's studies. He called them "terrible."

"This French study that everybody seized on was a study of 20 patients who were hospitalized. It's not a randomized blinded study. They excluded a number of patients from the study who didn't take the chloroquine — something like six patients — because three of them went to the ICU. One of them died. One of them left the hospital, and the other one stopped because of nausea."

But despite academic backlash, Raoult has used his social media following to circulate his ideas. His YouTube updates on the virus have millions of views. And it's believed that the frenzy around chloroquine actually stemmed from Raoult's March 16 update, where he announced study results showing chloroquine could be used to treat COVID-19. Those findings were tweeted out by Elon Musk, and they eventually appeared on Fox News on March 19. In a press conference the same day, President Trump touted the drug as a "game-changer" and wrongly stated the FDA had approved it to treat COVID-19.

And the confusion around hydroxychloroquine's efficacy has only been furthered by a new study out of China. Sixty-two patients with mild cases of COVID-19 were split into two groups. The control group received normal care, while the other got that plus the drug. Hydroxychloroquine appeared to help reduce fevers and coughing, and improve pneumonia in 25 of 31 cases, compared to 17 in the control.

Chloroquine and hydroxychloroquine are in short supply after President Trump touted them as potential COVID-19 treatments.

Those contradictory findings may contribute to the ongoing COVID-19 "infodemic," or the excessive quantity of COVID-19 information that's sometimes inaccurate. It makes it hard to find reliable information on the disease. Social media companies are are trying to alleviate this by being more proactive about removing chloroquine misinformation. In the past week, Twitter removed a tweet from Rudy Giuliani for stating that the drug "was found 100% effective in treating the coronavirus."

But that frenzy has still led to fatal misinformation about the drug. An Arizona man and his wife reportedly drank a small amount of chloroquine phosphate after watching President Trump's briefings and reading misinformation about it online. The man died and the woman was hospitalized. She later told an NBC News reporter they felt the drug was safe because "Trump kept saying it was basically pretty much a cure."