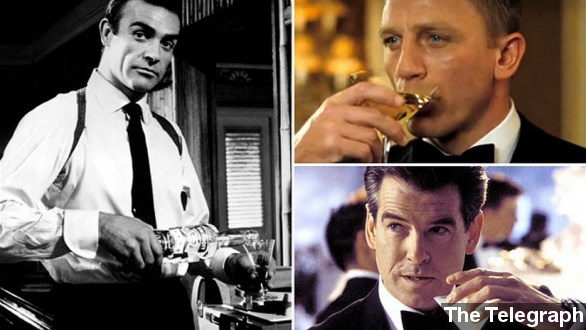 A study conducted by researchers in Britain shows that James Bond consumes 92 drinks per week on average.

James Bond may love women and vodka martinis, but perhaps not in equal measure. New research shows the man with a license to kill probably would have killed himself from excessive drinking.

By counting the number of drinks the spy consumes throughout each of Ian Fleming's 14 Bond novel, scientists in Britain concluded that Bond's level of alcohol consumption would have left him physically unable to perform his duties in the field. (Via BBC, WXYZ)

The results of the study show that 007 consumes, on average, four times the average weekly limit for a healthy male.

That amounts to a whopping 92 drinks per week, or around a bottle and a half of wine every single day. USA Today explains: "It's no wonder ... Bond prefers his martinis 'shaken, not stirred.' The man has such a severe drinking problem that he probably suffers from hand tremors that make stirring a cocktail — if not shooting a gun — impossible."

The highest amount Bond drank in single day was around 50 drinks in "From Russia with Love." That's the equivalent of drinking more than 2 gallons of beer. (Via Eon Productions)

Aside from shaky hands, researchers also suspect Bond would suffer from sexual dysfunction, and they predicted that if he continued to drink at those levels, it's likely he wouldn't live to see age 56. (Via Sony Pictures)

Fleming, who created the Bond character, also frequently drank and smoked tobacco. He died of heart disease at age 56. Researchers wrote, "We suspect that Bond's life expectancy would be similar." (Via The Telegraph)

So while we understand the pressures to drink are high when you're dealing with international terrorists and high-stakes gamblers, please slow down 007. For us. The world needs you.