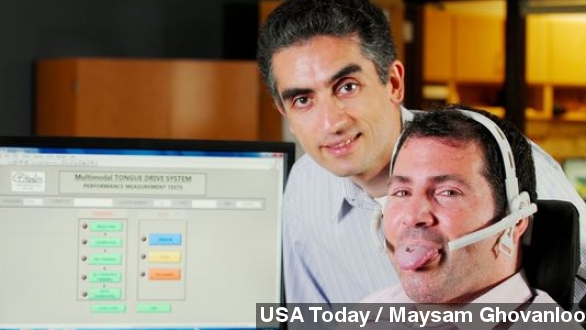 New technology is allowing those in wheelchairs take more control of their lives.

It's called the Tongue Drive System it helps people who are paralyzed in all four limbs to control their wheelchair by a tongue-ring looking magnetic sensor and a headset. (Via LiveScience)

But, if you think that alone is cool, then you'll be even more impressed to know it can do much, much more.

The tongue-ring sensor allows users to make phone calls, play video games, and even turn on lights. (Via USA Today)

The creator of the system, Georgia State Institute of Technology professor Maysam Ghovanloo, told Fox News the tongue is the best body part for this technology because its nerves are connected straight to the brain.

"Everything from the neck down is controlled through the spinal cord, so if the spinal cord is damaged, everything below that level becomes paralyzed… But even people with the highest level of spinal cord injury, they maintain their tongue motion."

Ghovanloo and his team have been working on this type of technology since 2005, showing it off in many forums including this 2012 Ted Talks speech. (Via YouTube / TEDxTalks)

Current mouth-powered technology for wheelchair patients generally involves the sip-and-puff methods — inhaling or exhaling on a tube to click parts of a computer. (Via YouTube / Jim Meldrum)

Ghovanloo says the next developmental step for him and his team is to create a system without a headset. To do that, he's created his own startup company called Bionic Sciences.