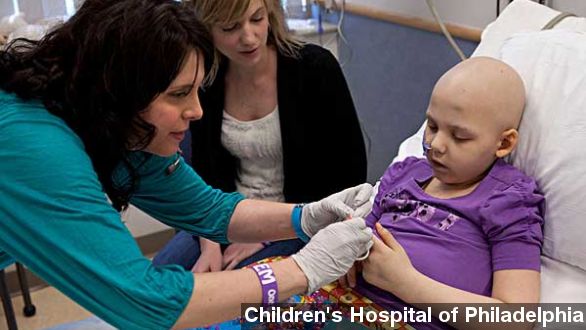 A new treatment for cancer has many in the medical community excited and has helped 25 people become cancer-free.

A new treatment for cancer has many in the medical community excited and has helped 25 people become cancer-free.

"What if you could fight off cancer as easily as the common cold? Researchers now testing this idea by reprogramming the cells of leukemia patients to destroy cancer cells similar to the way your body fights a virus." (Via Fox News)

The treatment comes from researchers at the University of Pennsylvania. This new treatment doesn't have a very large sampling size yet, but numbers have been encouraging with the small group.

According to  Newser, of 37 adult leukemia patients, 12 went into remission and another eight went into partial remission. Of 21 pediatric patients, an overwhelming majority of 18 went into complete remission.

CNN tells the story of a young teen who tried chemotherapy, radiation and a bone marrow transplant before giving the treatment a try.

"I'm feeling good now, so I think they did pretty well."

As with any cancer treatment, the big question is relapse, but CNN points out the numbers appear to be encouraging in this area as well.

Cancer is the second most common cause of death in the United States, behind heart disease. It is estimated leukemia specifically will kill more than 23,000 people in 2013.