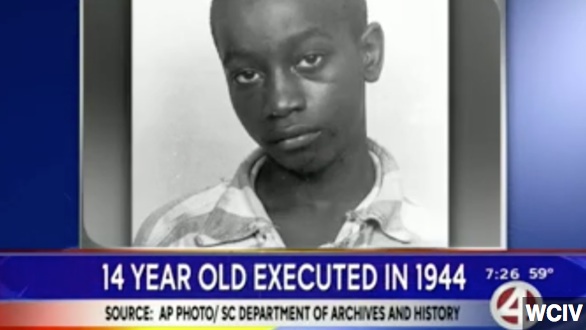 In 1944, a 14-year-old black boy was executed for killing two white girls. Almost 70 years later, his supporters are now asking a South Carolina judge to grant him a new trial.

George Stinney’s family filed a motion last week in an effort to prove his innocence. It claims Stinney gave police a forced confession possibly due to the fact he lived in a segregated society. (Via WLTX)

“The motion includes sworn statements from two of Stinney's siblings, saying he was around them all day when the girls were killed.” (Via WMBF)

The motion also mentions rumors of a deathbed confession from a white man years ago and the possibility that Stinney confessed because his family was threatened.

The two girls he was accused of beating to death were 11 and 7 years old. A town resident claimed he saw Stinney talking to the two girls the day they went missing while picking wildflowers. Stinney was arrested one month later. (Via WCIV)

The Guardian reports Stinney’s all-white jury spent “barely 10 minutes” to convict him of beating and stabbing the girls to death. The entire trial lasted just two and a half hours.

But even with new evidence or testimonies, getting a new trial won’t be easy after 69 years. South Carolina doesn’t easily grant the introduction of new evidence after a trial is over. And the judge could refuse to hear the request altogether since the punishment was already carried out.

This request has brought together two hot button points in the American legal system: The death penalty and race.

Supporters of the death penalty argue it is more cost efficient than life sentences in prison for those convicted of heinous crimes, while opponents say innocent people are sometimes executed and the motive is revenge, not justice. There are currently 32 states which use the death penalty. (Via DeathPenalty.Org)

Stinney’s supporters say they prefer exoneration to a pardon which they have also asked for. A date for a hearing on the new trial request has not been set.