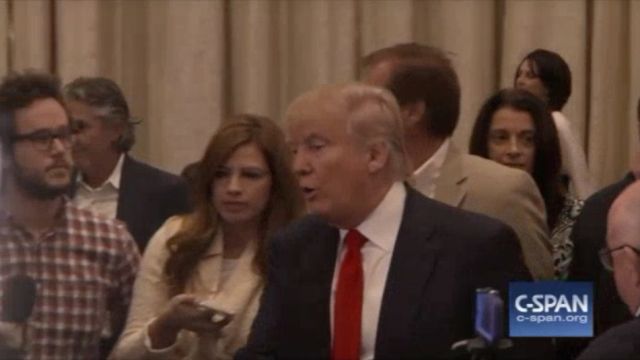 Breitbart's Michelle Fields has filed a police report after allegedly being assaulted by a Trump staffer at a campaign event.

Donald Trump's presidential campaign is still at odds with the media over what exactly happened to a Breitbart reporter during a Trump press conference. But a new video from C-SPAN could help shed some light on the incident.

That's Michelle Fields, the Breitbart reporter in question, approaching Trump with a question after a press event. The man behind Trump is Corey Lewandowski, his campaign manager. As the group walks out of frame, Lewandowski appears to reach for Fields' arm.

"I can't believe that he just did that. That was so hard," Fields said.

Fields claims Lewandowski bruised her arm by roughly pulling her away from Trump. She filed a criminal complaint about the incident Friday. Lewandowski and the rest of the Trump campaign have denied the allegations, attacked Fields' credibility and suggested she was mistaken.

Breitbart's election coverage has been heavily pro-Trump, and the outlet has been accused of downplaying Fields' accusation. Its official statement supports Fields and demands an apology from the Trump campaign, but Breitbart also published a post criticizing Fields' account of events. That post was later updated to include information from the C-SPAN video.

And Breitbart spokesman Kurt Bardella has parted ways with the company after saying he couldn't give them "100 percent of [his] ability." A report from The Daily Beast claimed Bardella initially instructed Fields to keep quiet about the incident, though he denies that.

This dispute is one of a number of violent incidents that have erupted at Trump events. During Thursday's debate, Trump acknowledged the anger present at his rallies but said he doesn't condone violence.

This video includes clips from C-SPAN and Newsmax.