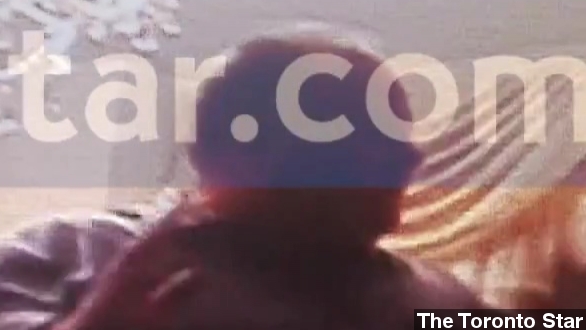 Just when you thought things couldn't get any worse for Toronto Mayor Rob Ford this week, the Toronto Star found this video.

The exclusive footage shows Ford pacing, ranting, and gesturing wildly in a living room — and someone happened to be filming him. (Via Toronto Star)

The object of Ford's anger is unknown, as is the identity of the person who caught the incident on camera. It's also unclear who Ford is talking to in the video. But judging from what can be made out from his ramblings, Ford appears to be furious with someone who called him.

The Toronto Star says it purchased the video from someone who filmed it from someone else's computer. The publication claims the person with that computer was there in the room at the time. (Via The Huffington Post)

When given a chance to defend his actions in the video, Ford told reporters:

"I was very very inebriated. It is extremely embarrassing. The whole world is going to see it. You know what, I don't have a problem with that.  (Via CBC)

This new footage is just a drop in the bucket of Ford's bad publicity this week. After denying it for months.

... the mayor admitted Tuesday: "Yes, I have smoked crack cocaine. ... Have I tried it? Probably in one of my drunken stupors." (Via The Guardian)

A video the Toronto Star says appears to show Ford smoking crack surfaced in May, but he repeatedly denied the allegations and the very existence of the video in question. The footage still hasn't been released to the public. (Via ITN )

Ford rejected calls to resign or take a leave of absence after the admission, but he did apologize. No explanation has been offered for Ford's bizarre and angry behavior in this newest video.