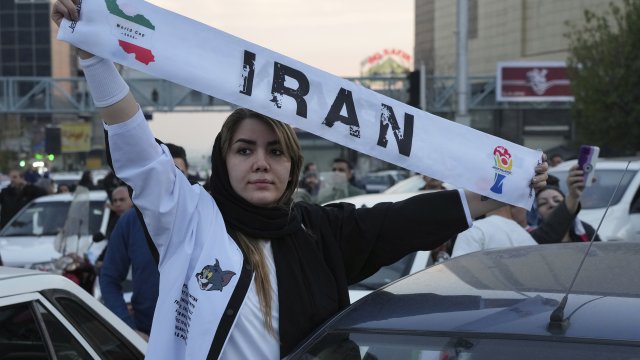 The World Cup has arguably seen just as much action off the field this year as on it. A lot of it has been focused on Iran.

Iran state media is calling on soccer’s governing body, FIFA, to kick the United States out of the World Cup after the U.S. Soccer Federation temporarily displayed Iran’s flag without the emblem of the Islamic Republic. The image was seen on the Federation’s Twitter, Facebook and Instagram accounts and meant to support protesters in Iran.

"We had no idea about what U.S. Soccer put out," Berhalter said. "All we can do on our behalf is apologize on behalf of the players and staff."

The countries play each other Tuesday evening — and either a draw or loss would eliminate the U.S.

Reports Sunday from the Black Reward hacktivist group also showed that Qatar provided a list of Iranians who bought tickets to the games, including 500 anti regime activists. According to audio published by Iran International, Qatari officials promised to control spectators including which kinds of Iranian flags spectators could bring in.

All of this comes as tensions are still at fever pitch in Iran over the killing of Mahsa Amini, a 22-year-old woman who died after being arrested for not wearing hijab in accordance with Iran’s strict laws.

The UN Human Rights Council voted Thursday to condemn the attacks on protesters and is launching an investigation into the crackdown, particularly the violence against women and children.

25 countries backed the measure, while six — including China, Pakistan and Venezuela — opposed it.