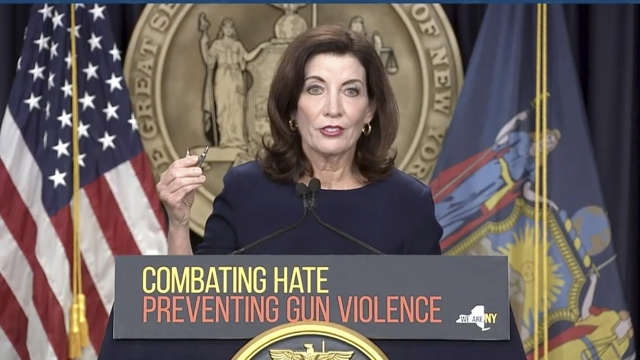 New York's legislature passed a bill that would ban anyone under the age of 21 from buying or owning a semi-automatic rifle.

New York's legislature voted Thursday to ban anyone under age 21 from buying or possessing a semi-automatic rifle, a major change to state firearm laws pushed through less than three weeks after an 18-year-old used one of the guns to kill 10 people at a supermarket in Buffalo.

The bill raising the age limit is the most significant part of a package of gun control measures announced earlier this week by Democratic legislative leaders and Gov. Kathy Hochul.

Other new legislation will restrict civilian purchases of bullet-resistant armor, which was worn by the killer in Buffalo, and require new guns to be equipped with microstamping technology that can help law enforcement investigators trace bullets to particular firearms.

Second amendment advocates believe allowing gun owners to carry weapons outside the home will prevent crimes in the city and elsewhere.

The age limit bill passed the Senate along party lines, 43-20, and in the Assembly 102-47, and will now head to Hochul's desk for her signature.

New York already requires people to be 21 to possess a handgun. Younger people would still be allowed to have other types of rifles and shotguns under the new law, but would be unable to buy the type of fast-firing rifles used by the 18-year-old gunmen in the mass shootings in Buffalo and at a Texas elementary school.

Besides raising the legal purchase age to 21, the bill would also require anyone buying a semi-automatic rifle to get a license — something now only required for handguns.

Many Republicans opposed the new gun limitations, arguing they would inconvenience law-abiding firearms owners and could be easily circumvented by people determined to get weapons.

The age limit change would largely impact areas outside New York City, which already requires permits to possess, carry and purchase any type of firearm and prohibits most applicants under 21.

New York would join a handful of states — including Florida, Hawaii, Illinois, Vermont and Washington — that require buyers to be at least 21 instead of 18 to purchase some types of long guns. Similar legislation has been proposed in Utah.