New York Braces For Omicron Outbreak Ahead Of Holidays 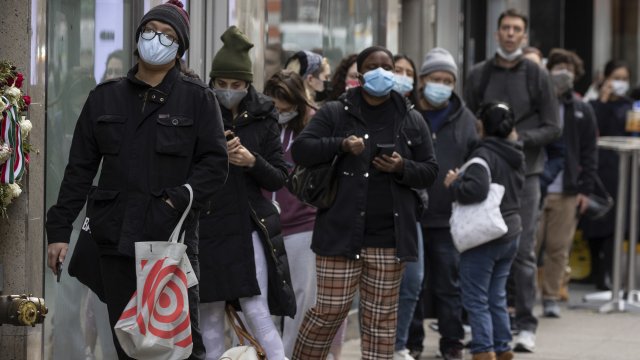 Omicron makes up around 13% of total cases in New York and 3% total in the U.S.

The race is on to contain the spread of Omicron, as New York City again braces to be one of the country's outbreak epicenters one week before Christmas.

"The data that we monitor so closely is showing an alarming trend," Dave Chokshi, commissioner for the Department of Health and Mental Hygiene, said. "Omicron is here in New York City, and it is spreading quickly."

The CDC announced Omicron makes up about 3% of total COVID-19 cases in the U.S., but that number is around 13% in New York.

Health officials are alarmed, with test positivity doubling in three days. That's something one of the mayor's senior public health advisers says they have never seen before.

"Obviously, we knew Omicron was here and we knew it was going to be more of a presence in our city," Mayor Bill de Blasio said. "It's now quite clear that it is, and we need to be very aggressive."

De Blasio announced a new series of measures, including increasing testing capacity to prevent lines that can be seen stretching around city blocks.

The city will also distribute 1 million KN95 masks for free, along with half a million at-home tests.

Leaders also plan to beef up business inspections to make sure they're following vaccine mandates.

But it's an all-too-familiar sight.

Because of breakthrough cases in casts and crews, multiple Broadway shows have called off performances; sporting events have been postponed or canceled; and some are rethinking holiday plans.

For now, plans for a New Year's Eve celebration in Times Square are on, but de Blasio says officials will watch the data very carefully.

"I do expect cases will continue to increase in the coming days, and this is based on the trajectories that we're following from other countries like South Africa, the United Kingdom, and Denmark, as well as other places," Chokshi said.