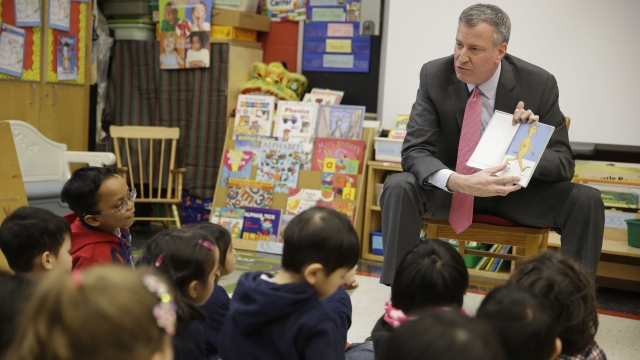 The program will start with a few neighborhoods in fall 2017, and Mayor Bill de Blasio hopes to offer it citywide by 2021.

Three-year-olds in New York City will soon be able to go to preschool for free.

Mayor Bill de Blasio announced the 3-K for All program April 24. It builds on New York City's efforts to provide preschool education to all 4-year-olds through an initiative known as Pre-K for All.

"There's one opportunity to get it right when the brain's developing, and we can get a child to learn so deeply and to be on a path of lifelong learning," de Blasio said when announcing the initiative.

This new program aims to provide free full-day, high-quality early childhood education for every 3-year-old in the city, regardless of their family's income level.

Some schools make students wash tables, wear special wristbands or even throw their food away if they've racked up debt on school food.

De Blasio says children in the south Bronx and Brownsville, Brooklyn, can start enrolling in the fall. And he hopes to expand the program citywide by 2021.

De Blasio says the city will spend $177 million per year on the initiative by 2021. On top of that, the city will need a total of $900 million from the state and federal governments to completely fund the classes.

With the 3-K for All program, New York City will join a handful of U.S. cities that offer free preschool for 3-year-olds, including Washington, D.C.