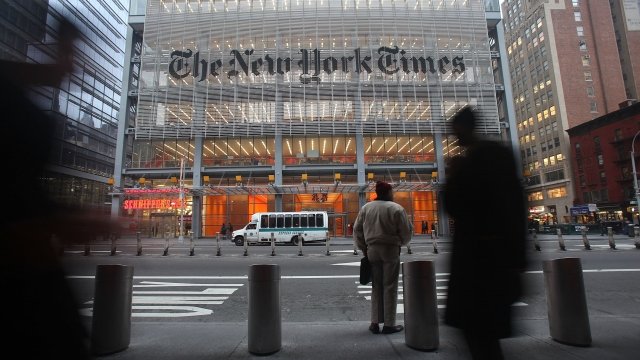 A "Fox and Friends" segment used a general's comments to blame the paper for leaking info about ISIS leader Abu Bakr al-Baghdadi.

The New York Times still wants an apology from "Fox and Friends" for a segment it called "malicious and inaccurate."

Here's the clip it's referring to:

The segment is titled "US General: NY Times leak allowed ISIS leader to slip away," and it aired Saturday morning.

"This ISIS leader, al-Baghdadi, was able to basically sneak away in the cover of darkness after a New York Times story went to press in 2015," weekend host Clayton Morris said.

Co-host Peter Hegseth later referred to the "failing New York Times," saying, "It's not just failing in its credibility, it's failing our country."

The segment was about a tweet from President Donald Trump. It was likely referring to this Fox News article that quotes Gen. Tony Thomas, who spoke at the Aspen Security Forum on Friday.

"Have we been close to Baghdadi, and why did we lose him?" Fox News reporter Catherine Herridge asked.

"We have been close on several — in fact, sometimes, we have been closer than we know. ... Unfortunately, it was leaked in a prominent national newspaper about a week later, and that lead went dead," Thomas said.

The "Fox and Friends" segment also featured Thomas' comments. But the Times article that Fox News and Thomas put blame on was published June 8, 2015. The raid happened May 16, and the Pentagon released a statement about it on that day.

That Times article said: "New insights yielded by the seized trove — four to seven terabytes of data, according to one official — include how the organization’s shadowy leader, Abu Bakr al-Baghdadi, operates and tries to avoid being tracked by coalition forces."

Fox News also covered the raid weeks before that Times article was published.

Herridge, one of two reporters who wrote the story that mentions the New York Times' article, later appears in the May 17 show, according to the posted transcript.

She said: "Chris, the intelligence gathered from the raid is described this morning as a treasure trove of information, including cell phones, laptop computers and documents. They reveal how the ISIS network communicates and earns money to finance its operations in Iraq and Syria."

The article on Fox's website was updated to include the Times' letter. "Fox and Friends" host Steve Doocy mentioned the controversy Monday morning.

"Well, on Sunday the New York Times sent Fox News a lengthy statement saying the Times described its 2015 reporting to the Pentagon before publication and they had no objections," Doocy said.

The Times said the update "wasn't an apology, nor did it begin to address the larger issues with the Fox & Friends Weekend segment, one of which was sheer hypocrisy."

The Times also published its own fact-check of the claims made by the general, Fox News and the president.