New Zealand Had Second Thoughts About Adopting That New Flag 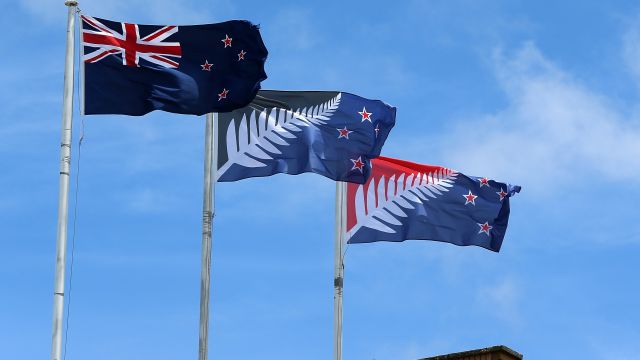 Some New Zealanders wanted to change the country's flag because the current design features Britain's Union Jack and looks a lot like Australia's.

After 2.1 million votes cast, $18 million spent and a monthslong redesign process, New Zealand's flag will be staying exactly the same.

During a two-part referendum, 57 percent of voters in New Zealand decided to keep the country's flag featuring Britain's Union Jack in the top left corner — a callback to when New Zealand was a British colony.

That and the similarities to Australia's flag were part of the reason New Zealand Prime Minister John Key has been so vocal about changing the design.

More than 10,000 submissions were received — some more serious than others.

"How did this one not make the cut? The title, its actual title, is 'New Zealand's True Nature,'" comedian John Oliver joked.

Officials whittled the number down to 40, then five. Then, New Zealanders took it down to one to go head-to-head against the incumbent flag in a public vote.

This flag, designed by Kyle Lockwood and featuring a silver fern, was chosen to go up against the official New Zealand flag — but ended up falling roughly 300,000 votes short.

While Prime Minister Key isn't thrilled about the results, he said he'll back the people's decision and asked others to do the same.

This video includes images from Getty Images and the New Zealand government.