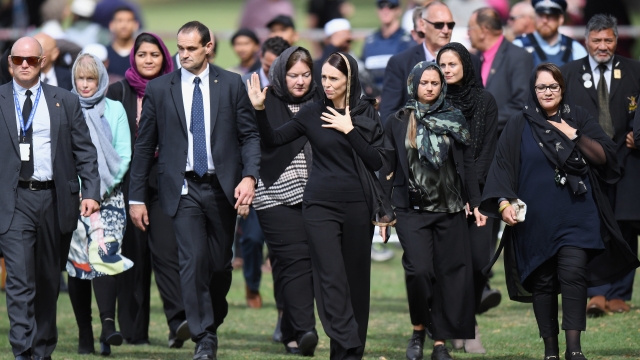 The country broadcast the Islamic call to prayer Friday afternoon and held two minutes of silence.

New Zealand Prime Minister Jacinda Ardern and thousands of others gathered together near the Al Noor Mosque in Christchurch Friday for a national day of reflection. The mosque was one of two that was targeted earlier this month in a deadly attack.

"When any part of the body suffers, the whole body feels pain. New Zealand mourns with you. We are one," Ardern said.

Prior to observing two minutes of silence to remember the 50 victims Friday, the Islamic call to prayer was broadcast across the country.

"We are broken-hearted, but we are not broken. We are alive, we are together, we are determined to not let anyone divide us," Gamal Fouda, the Imam of Al Noor Mosque who led the prayers, said.

Later in the afternoon, a mass funeral was held for 26 victims of the attacks, including the youngest victim who was just three years old. About five thousand mourners were in attendance. The New Zealand Herald reports that's equal to roughly one-tenth of the country's Muslim population.

Beyond Christchurch, residents gathered in other cities Friday to grieve together, including Auckland — where four nearby mosques opened their doors to all New Zealanders.

At least two other community-led vigils are being held in Christchurch throughout the weekend.