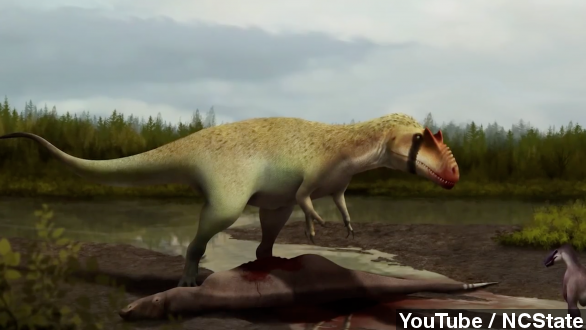 Scientists have discovered a new dinosaur species that they believe weight about 4 tons and was 30 feet long.

Paleontologists have finally pinpointed a new species of dinosaur five years after finding a hip bone fossil while on a dig in Utah.

Meet the Siats meekerorum, which the scientists appropriately named after a mythical Ute tribal monster from the same area. (Via KTVK)

The fossil discovered belonged to a dinosaur that weighed about 4 tons, was 30 feet long and roamed the Earth about 100 million years ago. (Via The Salt Lake Tribune)

A paleontologist at North Carolina State University announced the new species Friday. Dr. Lindsay Zanno was still studying at NC State when she and fellow scientists from North Carolina and Illinois discovered the fossil in 2008. (Via WRAL)

In a video published by the university Friday, Zanno talked about how common these once-unknown creatures actually were.

The curator from a museum tied to the study told CNN if Siats wasn't bigger than the T. rex, another dinosaur was: "At least 98 million years ago, we know that [tyrannosaurs] were small and somebody else was top dog in the neighborhood."

The Los Angeles Times reports the T. rex was about the size of a Great Dane when the Siats was still around. The scientists say the T. rex didn't really emerge as a major predator until about 30 million years later, once the Siats was believed to have been extinct.

A scientist told CNN the team found two other species from the same prehistoric time period but didn't give any more details.