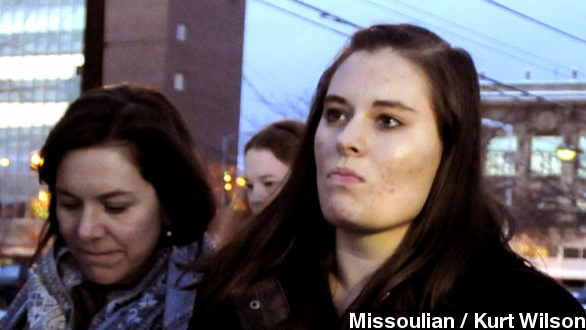 Jordan Graham has pleaded guilty to pushing her husband off a cliff eight days after they wed.

The newlywed bride accused of pushing her husband off a cliff to his death agreed to plead guilty to second-degree murder Thursday.

Federal authorities say 22-year-old Jordan Graham pushed her new husband, Cody Johnson, off the edge of a cliff in Montana's Glacier National Park. The incident occurred on July 7, eight days after the couple was married. (Via Fox News)

Prosecutors accused Graham of luring Johnson to his death after having second thoughts about the marriage.

But Graham's defense team maintained she pushed her husband in self-defense during an argument and Johnson's death was an accident. They said the couple showed no signs of marital strife in the days before Johnson's death. (Via HLN)

Graham changed her plea to guilty after cutting a deal with prosecutors, who agreed to drop charges of first-degree murder and making false statements to authorities.

The New York Daily News notes Graham tried to conceal her role in Johnson's death in multiple ways, including "set[ting] up a fake email account for a person named 'Tony' to make it seem like 'Tony' was with her husband when he died."

No sentencing date has been scheduled for Graham. She could face a maximum sentence of life in prison.