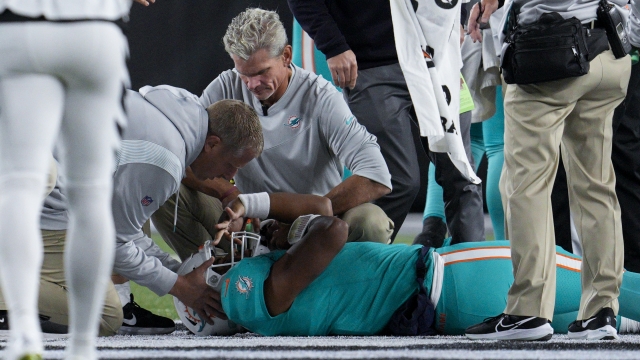 The Newsy investigative team digs into loopholes that allowed the NFL took to put players back on the field after apparent concussions.

The league is also promising reforms to its concussion rules after the Miami Dolphins allowed quarterback Tua Tagovailoa to return to play in the same game in week three of the season, after a hard hit left him shaking his head and stumbling around as he got up and tried to jog. The Dolphins said the quarterback’s instability was due to a "back injury" and allowed him to play later that same game. In another game four days afterward, Tagovailoa was hit again and escorted off the field on a stretcher.

But the question of how that initial back injury diagnosis was made remains at the heart of a mounting controversy and an ongoing investigation.

Newsy’s investigative team has been looking into what critics are calling a serious conflict of interest in the NFL's concussion rules that they say could put other players at risk.

Amy Fan contributed to reporting for this story.

Miami Dophins quarterback Tua Tagovailoa's injury has relit a spotlight on how the NFL handles brain safety and concussions.