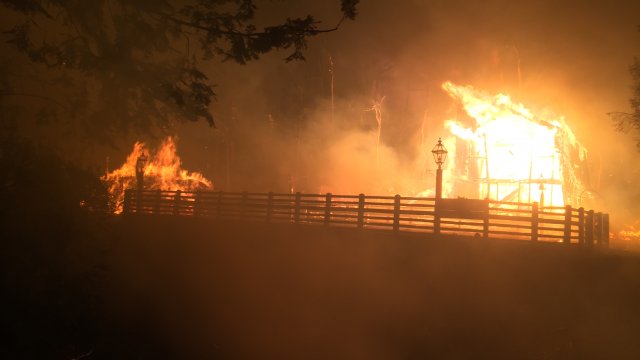 The Chimney Tops 2 wildfire began on Thanksgiving weekend in 2016 as a typical forest fire deep in The Great Smoky Mountains National Park of eastern Tennessee.Five days into the fight to contain the blaze, hurricane-force wind launched embers for miles, firebombing the parched, dense woods surrounding the resort town of Gatlinburg.“It was the perfect firestorm,” Sevier County Mayor Larry Waters said. “It’s almost like it exploded.”First responders scrambled to evacuate thousands of people, but the county never sent evacuation messages to cellphones. Emergency alert messages on TV and radio came hours after the disaster began.

Interactive: What it's like to be trapped in a megafire

Fourteen people died, including a mother and her two young daughters. They were trapped on a mountain suddenly engulfed in flames, their escape blocked by fallen trees and utility poles.“Nobody called us telling us. We had no text messages,” said Genie Brabham, whose cabin burned. “The paid officials who get paid to protect and serve didn’t say a thing, just left us here to die.”The mayor said in hindsight, evacuation efforts probably should have started earlier but officials struggled to understand the scope and fast growth of the fire.Across the country, community officials are failing to send emergency alerts to cellphones, televisions and radios during mega wildfires, depriving families of time to escape with their lives.

A Newsy investigation found local authorities responsible for evacuations often are unable or unwilling to use FEMA’s Integrated Public Alert and Warning System (IPAWS).IPAWS, online since 2012, is the only way to send warnings simultaneously to all cellphones, TVs and radios in the danger zone during a wildfire. Newsy found dozens of counties in forested areas still unable to use the system, even as more people build homes in wooded areas and as climate change and other factors, such as overgrowth, turn more forests into kindling.Unlike with weather disasters, the federal government leaves it to communities to issue their own warnings during fires because fire is not considered a weather event. FEMA makes IPAWS available to local authorities, but they must first go through a number of steps to get certified to use the system.

The process begins with reaching out to FEMA to formally request access to IPAWS, something Sevier County, Tenn., had not done before the wildfire. The county instead relied on the state emergency management office to use IPAWS for them in an emergency. That plan failed the night of the fire when communications with the state broke down. FEMA recommends local authorities have their own access to IPAWS.Newsy examined 321 counties with as many or more people living in wildland areas as Sevier County and found, as of March, 97 — 30 percent — still haven’t signed up to use IPAWS.Mark Lucero, chief engineer of IPAWS at FEMA, said only a fraction of places eligible to be on the network have sought access to it. Other places have FEMA’s approval to use IPAWS, but don’t send alerts in emergencies.“What we've seen is that there's a pretty small percentage of people who actually have access to IPAWS that are really using it, and we're trying to figure out why that is,” Lucero said.

Dianna Bryant, a crisis and disaster management expert at the University of Central Missouri, said cost helps explain the slow adoption. FEMA requires governments to use a third-party alerting software to log into IPAWS. The price can range from $28,000 for smaller governments like Sevier County to hundreds of thousands of dollars for major cities.“You're talking about spending money on something that you might not ever use,” Bryant said. “It is a hard decision to make financially for a local government, especially when we have fire departments that don't even have an internet connection.”

Once a county or other place has paid for IPAWS-compatible software, it still has to take FEMA training on how to use it. Often an authority will start the process but never finish it, Lucero said.Eighty-five people died in last year’s Camp Fire wildfire in Paradise, California. It was the deadliest and most destructive fire in the state’s history. Officials tried to use IPAWS, but the software wasn’t set up correctly and alerts never went out.After the Chimney Tops 2 fire, Sevier County reached out to FEMA to get access to the system and has trained multiple people on the network.

The reporter can be reached at patrick.terpstra@scripps.com, or on twitter @patrickterpstra.