The Next Steps For Finland, Sweden As They Prepare To Join NATO 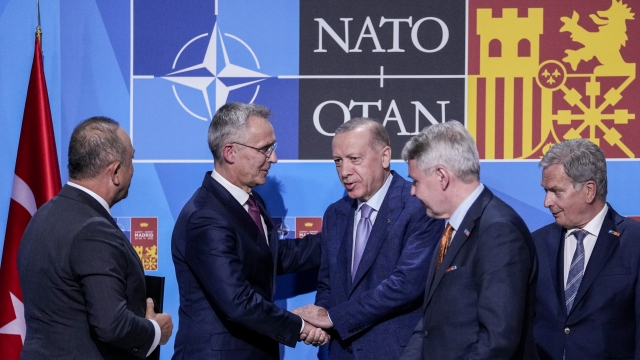 Sweden and Finland were approved to join NATO, but there are still some requirements the bloc needs to meet before they become official members.

The annual NATO summit wrapped up in Madrid Thursday, sharing a look at just how fast-tracked Sweden and Finland’s applications to join the military alliance might be and how that might impact sky-high tensions between Russia and the Western world.

"Before the war started, I told Putin that if he invaded Ukraine, NATO would not only get stronger, but would get more united," President Joe Biden said.

For a little recap, the two Nordic nations were formally invited on Wednesday to join the alliance. German Chancellor Olaf Scholz said they will launch the process of ratifying the planned NATO membership of Sweden and Finland this week and will conclude it “very quickly.”

"We stand ready to assure both countries of support already now as long as the accession process isn't formally completed concluded," Scholz said.

For comparison, it took North Macedonia — the most recent country to join the bloc — more than a year to get through the process.

When the North Atlantic Treaty Organization was first formed in 1949, there were 12 members. Today, it’s more than doubled in members to include 30 countries.

Every time a country wants to join, assent needs to be unanimous among all the members, and Turkey hadn’t exactly signed off on Finland and Sweden until Wednesday.

So, what else needs to happen to make it official?

The legislatures of all 30 current members must sign an Accession Protocol before individually ratifying it back home.

The candidates must also formally accept the obligations of membership. NATO has an "open door" policy where any country can be invited to join if it expresses an interest, as long as it is able and willing to uphold the principles of the bloc's founding treaty.

The original point of the treaty was to deter the Soviet Union from attacking liberal democracies that lacked military strength. One of the cornerstones of the alliance is Article 5, which says that an attack on one member is considered an attack against all and  guarantees that resources from any and all NATO members can be used to protect each other.

There are some other requirements: NATO members must be democracies, treat minorities fairly and commit to resolving conflicts peacefully.

Still, this marks a significant shift from two countries that had largely remained unaffiliated, so to speak: Finland declared independence from Russia in 1917 and during the Cold War, Sweden adopted a neutral foreign policy stance.

"Becoming a NATO member would actually mean that we leave 200 years of military non-alignment," said Swedish Prime Miniter Magdalena Andersson. "This was not an easy decision to take for me as prime minister, but I'm sure it was the right decision."

If Finland joined NATO, it would add another 800 miles to the military alliance’s border with Russia. The additions would also give NATO member states control of key areas in the Baltic Sea.

When asked his thoughts on the move, Russian President Vladimir Putin said he has no problem with the two countries joining NATO but also noted that if infrastructure is deployed to those countries, Russia will respond similarly.