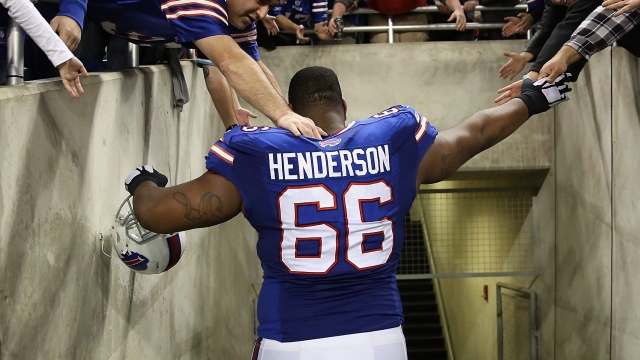 Buffalo Bills tackle Seantrel Henderson will be suspended for violating the NFL's drug policy. He says he uses marijuana to treat his Crohn's disease.

Buffalo Bills tackle Seantrel Henderson is reportedly facing a 10-game suspension for violating the NFL's substance abuse protocol — but his case may be different than a typical failed drug test.

Henderson has Crohn's disease, an incurable ailment that causes inflammation in the digestive tract. It can be extremely painful and  caused Henderson to miss five games last season. He also had to have 2.5 feet of his colon removed.

His agent, Brian Fettner, said Henderson used marijuana to treat his pain because that's really his only option.

Football players are used to pain, and many use opioid painkillers as treatment. But those painkillers can cause damage to the intestines — damage Henderson likely can't afford to have.

It's possible there could be a lawsuit against the NFL to get Henderson back on the field. He might have some legal recourse since medical marijuana is legal in New York where the Bills play.

In 2014, Gov. Andrew Cuomo signed the Compassionate Care Act, which says, in part, patients "shall not be subject to arrest, prosecution, or penalty in any manner … by a business" just for taking medical marijuana.

As Americans have adopted a more relaxed attitude about marijuana, the NFL has faced pressure to let its players use pot to deal with pain. Henderson's case could reveal a lot on how the league will deal with marijuana in the future.