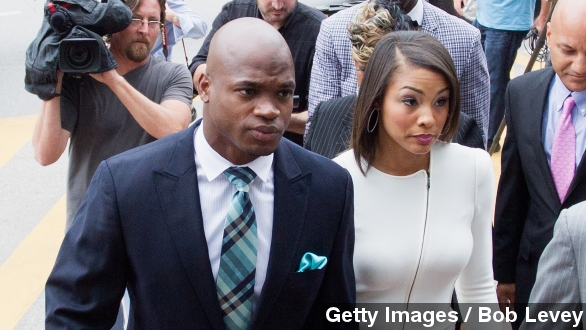 According to media reports, the NFLPA sent a letter to the NFL requesting Adrian Peterson be taken off the commissioner's exempt list.

While Adrian Peterson is finished in the court room following a plea bargain last week, he's not being reinstated by the NFL just yet. And the NFL Player's Association wants to change that.

ESPN reports the NFLPA sent the NFL a letter Friday, asking for the Minnesota Vikings RB to be taken off the commissioner's exempt list and reinstated. Per the report, Peterson's placement on that list states he "would be removed from the list upon resolution of his legal matter."

The NFL hasn't said if or when a decision will be made to let Peterson return to play this season, but, unsurprisingly, the running back reportedly wants to get on the field as soon as possible.

Which is why, as CBS Sports reports, the NFLPA could file a non-injury grievance by Tuesday to get him reinstated for Week 11.

But even that might not mean a return for AP. The Vikings too would need to welcome him back, which, according to another report by CBS, isn't a sure thing. That report says the club has concerns over his "physical and mental state" during the time off and also cites public relations issues.

Like the NFL, the Vikings have been mum on Peterson too, with their GM manager avoiding questions last week regarding the RB.

Just days ago, Peterson lost an endorsement deal with Nike. The company suspended its relationship with Peterson in September but terminated it Thursday.

Peterson pleaded "no contest" last week to misdemeanor assault charges stemming from allegations he hit his son with a 'switch' or tree branch.

Peterson's been ordered to pay a $4,000 fine and do 80 hours of community service as part of his plea deal.