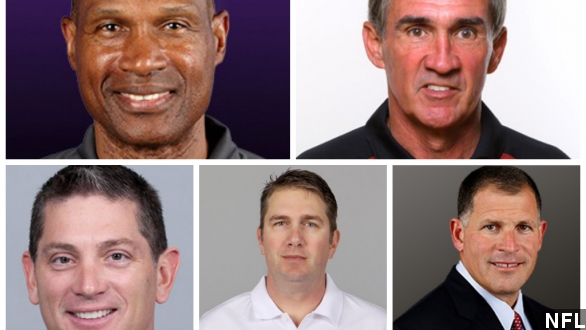 The Browns, Redskins, Lions, Vikings and Buccaneers all released their coaches Monday as the Jets and Cowboys stand pat for now.

It's called Black Monday around the NFL.

Possibly a reference to the stock market crash of 1987 because already-failed NFL teams are axing their coaches and looking to rebuild. (Via CNN)

Or maybe it refers to the shopping spree of Black Friday, since NFL owners are shopping around for the next head coach of their multimillion-dollar franchises. (Via ABC)

Well, wherever it got its name, the dreaded Black Monday is the first chance after the season for owners around the league to take out their frustrations on losing coaches by handing them their pink slips. And this year was no different.

The Browns started things off Sunday night with the firing of first-year head coach Rob Chudzinski after a 4-12 record. (Via WJW-TV)

"I did the best I could in the time that I was here, and hopefully it will work out for the next guy." (Via KMSP)

No shocker here, Mike Shanahan of the Washington Redskins was shown the door shortly after Frazier. The Redskins had a drama-filled season that ended with the franchise quarterback forcibly benched and rumors Shanahan was trying to get fired. (Via WJLA, NBC, NFL)

And that was just the start of it.

Then, Detroit Lions head coach Jim Schwartz was terminated after his team went 7-9 with six losses in their last seven games. (Via WDIV)

"They just found ways to lose. This is the second straight year that the Lions went winless in December." (Via WOOD)

It was a big day of coaching movements, but some names not on the list, at least on Monday, came as a surprise.

The Jets' Rex Ryan will live to see another day. Some writers called for his firing in the preseason when he put then-starting quarterback Mark Sanchez into the fourth quarter of a preseason game only for the QB to get injured and miss the entire season. (Via News 12 Long Island, Fox Sports)

And The Dallas Morning News reports the Dallas Cowboys Jason Garrett's job is safe despite America's team missing the playoffs for a fourth straight year.

ESPN's Ed Werder tweeted last week the Cowboys were likely to fire Garrett and his staff if they missed the playoffs. (Via Twitter / @Edwerederespn)

No surprises here, none of the teams we mentioned in this story qualified for the postseason.