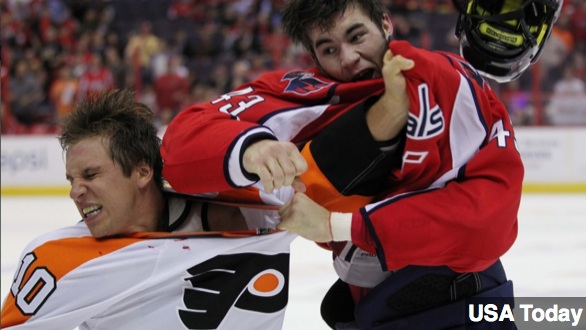 Ten former players have filed a class-action lawsuit against the National Hockey League for failing to protect and inform players about head injuries.

First the National Football League, and now the National Hockey League. Ten former NHL players have filed a class-action lawsuit against the league for failing to protect players from head-related injuries.

The complaint claims the NHL actively and purposefully concealed the severe risks associated with head injuries sustained from body checking and fights that can lead to brain impairment down the road. (ESPN)

It reads: "Many of the players, including Plaintiffs, sustained repetitive brain injuries while in the NHL and now suffer from latent or manifest neuro-degenerative disorders or diseases, all of which, in whole or in part, were caused by the NHL’s acts and/or omissions.” (Via New York Daily News)

That lawsuit, which contained similar language about the NFL failing to warn players about the long-term dangers of repeated head hits, ended in August after the NFL agreed to pay $765 million to settle the hundreds of cases. (Via PBS)

ESPN explains the NHL lawsuit " ... accuses the league of promoting a 'culture of violence,' in which players are praised for their fighting and 'head-hunting' skills."

And the attorney for the players says the league's refusal to outlaw "bare-knuckle fighting and body-checking" is at the center of the problem. (Via NESN)

"Instead, the NHL prefers to continue employing and glorifying 'enforcers,' players whose primary role is to fight and violently body-check opposing players." (Via USA Today)

The NHL says they're aware of the legal action, and Deputy Commissioner Bill Daly released this statement on behalf of the league.

" ... we are completely satisfied with the responsible manner in which the League and the Players' Association have managed Player safety over time, including with respect to head injuries and concussions.  We intend to defend the case vigorously and have no further comment at this time." (Via SB Nation)

The lawsuit involves players who in the league during the 70s, 80s, and 90s, including Rick Vaive, Gary Leeman and Curt Bennett. The NHL did not institute a concussion program until 1997 and did not start enforcing strict concussion protocols until 2011.