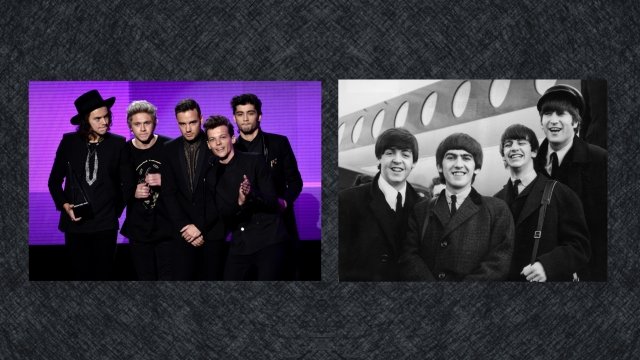 One Direction is now the only act since the Beatles to have three members' solo work reach No. 1 on Billboard's top albums chart.

Thanks to a certain singer-songwriter named Niall Horan, One Direction can now rank itself alongside the Beatles.

Horan's new album "Flicker" has debuted at No. 1 on Billboard's top 200 albums chart, making One Direction the only act since the Beatles to have three members top the chart with their own solo records.

Horan follows bandmate Harry Styles, whose solo work made it to No. 1 last May, and Zayn Malik, whose album debuted last year.

On the Beatles side, Paul McCartney, George Harrison and John Lennon all reached the top.

And Ringo Starr's solo work got close at No. 2.

So what's next for the young pop stars?

Although, some of McCartney's six No. 1's were with his other band Wings.

But One Direction can also surpass the Beatles if a fourth member gets a solo No. 1. We're looking to you, Liam Payne and Louis Tomlinson.

TEXT: But if a fourth member of One Direction gets a solo No. 1, the group could surpass the Beatles a lot faster. We're looking to you, Liam Payne and Louis Tomlinson.