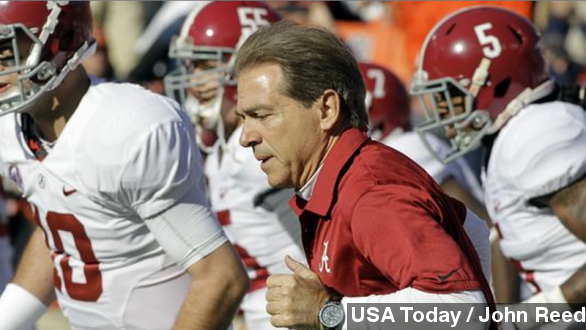 The University of Alabama confirmed Friday night that Saban is set to ink a long-term contract extension that will keep him with the Crimson Tide for likely the remainder of his coaching career. (Via ESPN)

Under his previous deal with Alabama, the four-time national championship winner made $5.5 million per year — making him the highest-paid coach in college football. (Via USA Today)

Now, Alabama has yet to release the exact terms of the extension, but we're guessing Saban is probably not taking a pay cut. Especially with rumors swirling that the 62-year-old might be packing his bags and leaving Tuscaloosa for Texas at the end of the season.

If this report is true, those rumors are essentially squashed — to the disappointment of many Longhorn fans. And Saban's news makes the coaching situation at that school even more cloudy. (Via Fox Sports)

Reports surfaced earlier this week that head coach Mack Brown would resign at the end of the season, but now fresh reports say the embattled coach will likely return for a 17th year with the Longhorns. (Via HLN / Bleacher Report)

Like Saban, Brown is also a national champion — but neither Brown nor Saban's team will be facing off in the BCS title game this year. Alabama is set to play Oklahoma in the Sugar Bowl, and Texas will take on Oregon in the Alamo Bowl.